So… That Happened: Right to Censor

The Attitude Era was and is known as the time that the WWF dared to push the envelope in every possible way at every given moment. Language, violence, sexual content… nothing seemed off limits. They say all news is good news but during the late 90’s and early 00’s, McMahon and his million dollar company came under fire from various concerned parents and school boards. “Won’t someone think of the children?”, Vince heard them cry. He gazed inwards upon himself and did what he always did in these trying times. He made fun of them on national TV. 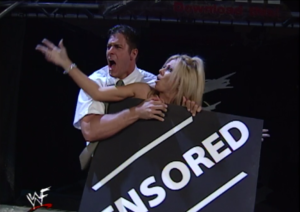 On the June 26th 2000 episode of Monday Night Raw [WATCH: Raw 370, June 26 2000, on the WWE Network], Jerry Lawler defeated WWF Light Heavyweight Champion Dean Malenko in the first and, unsurprisingly last, “Over the Top Rope, Off With the Top” match where each man represented the honour of one of the company’s female stars. With Malenko out of the ring three times, Terri Runnels (rather than The Kat) was forced to remove her bra for the paying customers and elated teenage boys at home when Stevie Richards came out from Gorilla position; covering her with a “Censored” sign and leading her to the back.

The following Thursday, The Godfather and Bull Buchanan were set for competition when Richards  appeared (complete with pompous, abrasive sirens instead of theme music) to explain his actions [WATCH: SmackDown 45, June 29 2000, on the WWE Network]. Specifically referring to himself as “Steven” Richards, he told the audience that he had the morals to do what the network and WWF didn’t by censoring Terri’s exposure and warned the Godfather to stop parading scantily clad women around on TV. Over the next few weeks, Richards would appear in matches to disrupt the non-PG nature of the era, such as by robbing the Dudley Boyz of their precious tables and covering Trish’s body much in the same way as he did previously. 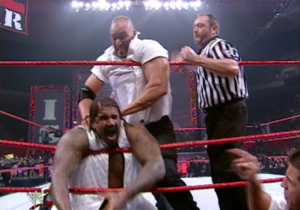 Eventually, Richards would confront The Godfather again [WATCH: Raw 373, July 17 2000, on the WWE Network] and berate him and the audience. Agitated, The Conductor of the Ho Train would approach Steven only to be attacked by Bull Buchanan, whom was dressed essentially the same as the Mormon-esque Richards. The next week [WATCH: Raw 374, July 24 2000, on the WWE Network] the two would clash in-ring again with the stipulation that should The Godfather lose, he would have to stop bringing his ladies to the ring and essentially cast off the pimp gimmick. The match is a solid Attitude Era bout with decent commentary (JR on the “save the hos” chant mentions bumper-stickers with 0800 numbers and a telethon) but worth a watch just for the heat. Godfather, the fun-loving midcarder, is more over than ever and Richards is booed incessantly and given chants of “asshole” upon arrival. This small feud was a perfect first step for Right to Censor and one that blurred the lines of reality and kayfabe, especially for fans who were aware of the reactions some of it’s more extreme moments were producing.

In the following weeks, the two were joined by The Godfather, now The Goodfather; a glasses-wearing convert of Richard’s moral teachings and their leader officially christened the group “Right to Censor”. The group made their PPV debut at SummerSlam [WATCH: WWF SummerSlam 2001, on the WWE Network] defeating Too Cool and beginning a streak of at least one match victory at every PPV they were a part of. Rather than moving into another long-term feud, the stable had a string of one-off matches as they found their footing and eventually another superstar joined their ranks. In September Goodfather and Buchanan lost a tag match with Road Dogg and Val Venis [WATCH: Raw 380, September 4 2000, on the WWE Network] but saved face by carrying the latter to a parked van outside and indoctrinating him into their little cult. The next month Right to Censor introduced their fifth and final member in Ivory [WATCH: Raw 387, October 23 2000, on the WWE Network], a perfect fit since she had been working a conservative gimmick earlier in the year. 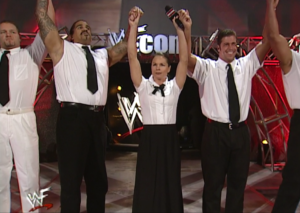 Right to Censor found further in-ring success from this point as Ivory brought gold to the faction by defeating Jacqueline, Trish and WWF Women’s Champion Lita for the belt the next month [WATCH: SmackDown 63, September 2 2000, on the WWE Network] followed by The Goodfather and Bull Buchanan winning the WWF Tag Team Championship [WATCH: Raw 389, November 6 2000, on the WWE Network]. As if the group wasn’t hot enough for continually interrupting segments and neutering fun characteristics of midcard characters, they were now holding two titles hostage and they had won neither cleanly. Appearing as an invading force, fans felt united behind the WWF name against the stable.

Sadly, it wasn’t to last. The men of the group had the attention of many teams in the WWF facing off against The Dudleyz and the Hardyz as well as several solo performers too but continued to have no main storyline. Barely a month after earning the tag titles, they were hot potato’d away at WWF Armageddon [WATCH: WWF Armageddon 2000, on the WWE Network]. Ivory fared a little better at the top of the women’s card and in retrospect her feud with Chyna that began in December is more interesting than it appears at first glance. After shooting with Playboy in real life, The Ninth Wonder of the World caught the ire of Right to Censor [WATCH: RAW 394, December 11 2000, on the WWE Network] who would use the numbers game to overpower her and give Val Venis the opportunity to hit a Spike Piledriver. 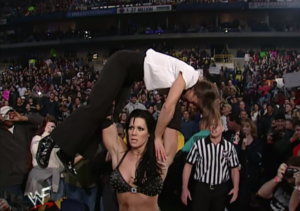 A couple of weeks later on Smackdown, Ivory would mock a heartfelt promo from Chyna whom was injured and fearing for her career [WATCH: SmackDown 71, December 28 2000, on the WWE Network] in a slimy, scathing, underrated faux-interview segment. Chyna would challenge Ivory for the WWF Women’s Title at next month’s Royal Rumble PPV [WATCH: Royal Rumble 2001, on the WWE Network] in what would be a hard-hitting but brief match. In order to garner yet more fan support, of which she had plenty already, Chyna extended the injury angle by pretending to hurt her neck once more. Post-match Jerry Lawler ran to her aid, demanding the use of EMTs; furthering the blurring of the line that the RTC had previously played with.

Whilst waiting for Chyna’s return, WWF span it’s wheels with the stable by having an angle where Kat was forcefully placed into the group. At No Way Out 2001 [WATCH: No Way Out 2001, on the WWE Network] Jerry Lawler had a singles bout with Steven Richards for the “services” of The Kat. Had Jerry won she would’ve had to strip naked on TV but since he lost to Richards she was forced to join RTC. What a great choice for her. The following night on RAW she was shown as a part of Right to Censor, albeit begrudgingly [WATCH: Raw 405, February 26 2001]. However, the next day the WWF announced that Kat had quit and Lawler followed suit and so the storyline was scrapped. Rumour says it was due to the fact that the story pitched would involve her sleeping with every member of the stable to corrupt and take it down from the inside.

Regardless, WrestleMania X-7 finally rolled around [WATCH: WWF WrestleMania X-7, on the WWE Network] and with it came the finale to the Ivory/Chyna storyline. Often cited as one of the best pay-per-views of all time; this doesn’t take into account the women’s division match as, as usual, neither did the WWF. The fight lasts less than three minutes and is simply put a squash match. Chyna helps to break Right to Censor’s PPV streak and in the same moment wins the WWF Women’s Championship for the first and last time as she would leave the company later that year. 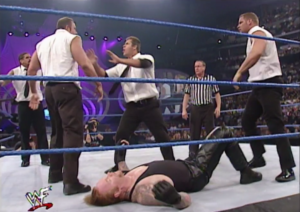 Right to Censor would officially disband a few weeks later as Val, Bull, Goodfather and Steven participated in a handicap match against The Undertaker [WATCH: SmackDown 88, April 26 2001, on the WWE Network]. The fight comes to a close with Richards’ followers beating down Big Evil as their leader cowered away, only coming to participate when he was sure Taker was out of commission. The others abandon him and he eats a Last Ride, marking the end of the stable not even a year since Richards first appeared in the necktie.

Some things occur to me immediately after watching all this back; it was not only a much shorter run than I remember but it was also very unfocused. After the Goodfather story, things start to feel a little scattershot with no long-term planning. Whilst rubbing shoulders with all the upper midcard at the time really helped them keep their heat, a lack of a strong feud ultimately made it very easy to throw the WWF Tag Team Championship on and off of the group.

More importantly, it was surprising to realise who the shining star of the faction was. Whilst Richards was a great pick to get the wheel turning (and you’d be hard-pressed to remember much else about his time in WWF specifically), it’s Ivory who comes out on top in retrospect by having the strongest storyline of the stable. The short run has made Right to Censor easy to forget which is sad because the gimmick worked very well at the time and they didn’t really have much in the way of a dud segment. The most memorable thing to the majority of fans, other than their blaring entrance noise, is probably the transformation of The Godfather into The Goodfather. I urge you to look back and reconsider. Not only did Ivory do a great job in her own role, she was the perfect foil at the time to a babyface Chyna.