By Greig Tansley on August 17, 2017 in IPW Australia, Oceania Wrestling 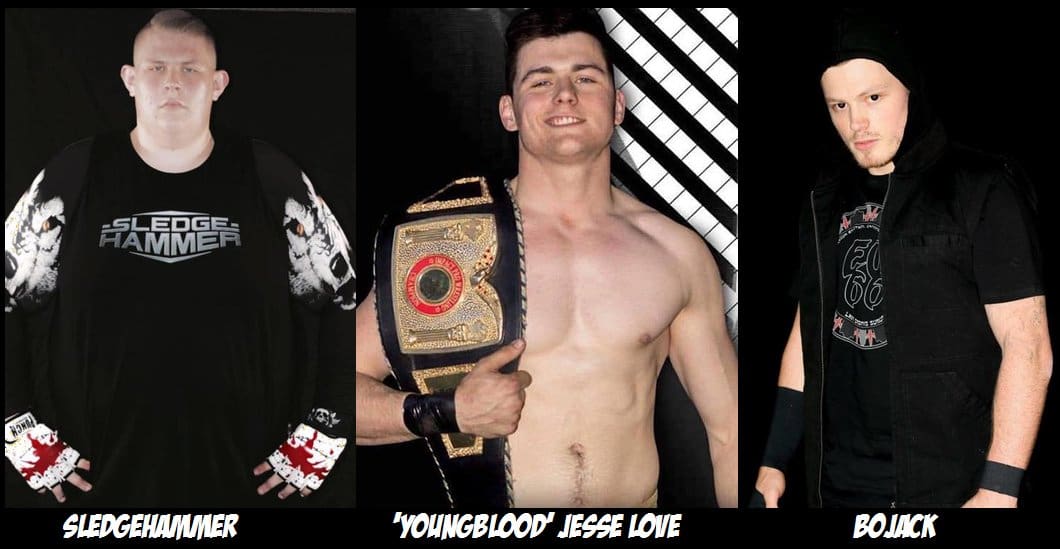 Well, it’s happened again. All Aussie. All the time.

By Steve Wray on April 7, 2017 in Event Results, IPW Australia 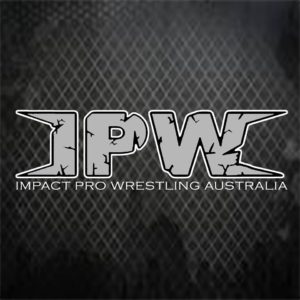 On April 1st, IPW Australia presented Live and Let Die from William Duncan State School in Nerang, Queensland. The event was taken to the extreme with two hardcore matches book ending the show. 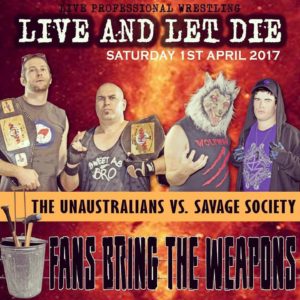 IPW Tag Team Champions, the UnAustralians (Sweet Ass and Kiwi Thriller) took on their bitter rivals, Savage Society (Josh Bruise and Wolfman) in a “Fans Bring the Weapons match”. As expected, this match started out hardcore with Savage Society sneaking up on The UnAustralians and hitting them with low blows with foreign objects. The match then broke out into mayhem with numerous weapons from guitars, to crutches, to bowling balls, hockey sticks and even a baby gate being handed to the wrestlers to use.

Savage Society got the upper hand and stacked all the weapons in the middle of the ring and laid the UnAustralians on the pile. Josh Bruise went to the top rope and hit a big splash pinning Sweet Ass and Kiwi Thriller. Your winners and new IPW Tag Team Champions: Savage Society. 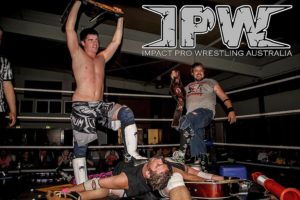 Next up, we had the IPW Woman’s Champ and crowd favourite, Willow, take on Benny Lava in an inter-gender match up. 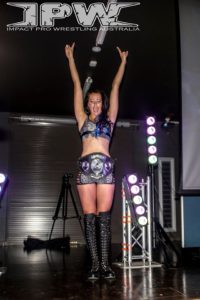 Willow got in a lot of offence to start the match. It went back and forth until Benny Lava pinned Willow for the win. This enraged Willow who attacked the referee and beat him down. Willow then exited the ring and snatched a couple of signs from the fans in the crowd ripping them up in front of them, turning on the fans in the process.

“The Greatest” Dalton Briscoe took on BJ Blade in the next match. These two have had an ongoing feud over the last few months and this match didn’t disappoint. A high paced, quality match where unusually, the crowd was cheering for the heel in Briscoe. The match went back and forth until Briscoe got the upper hand and the pin fall victory. 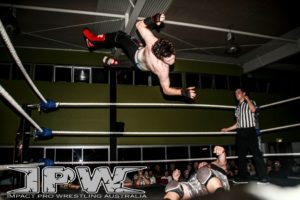 In my opinion, the next match was the highlight of the night. IPW Unified Champion Rob Daniels defending his title against rookie sensation Zeke Cruiser and “Youngblood” Jesse Love, who was accompanied by a battered and bruised Sweet Ass and Kiwi Thriller. Sweet Ass came out on crutches and Kiwi Thriller had bandages all over his body. Jesse cuts a very good (non PG) promo saying it is his time and he will be walking away with the belt. 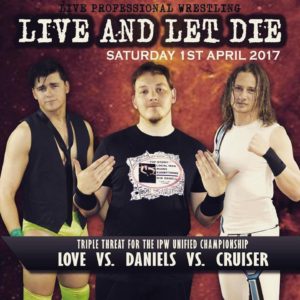 The match starts with Rob Daniels grabbing the mic claiming the match cannot go ahead due to his head cold, which means everyone may as well just go home. Zeke and Jesse (who have a long history of hatred towards each) other join forces to throw Daniels out of the ring. Zeke and Jesse battle back and forth and every time Daniels tries to get back into the ring he is knocked back down to the ground. Daniels has made a habit of pulling out a victory from nowhere in the past and came very close on a few occasions. But in the end, Zeke was pinning Daniels for the win when Sweet Ass dropped the crutches, revealing that he was okay, dragging Zeke off Daniels to give Jesse Love the win and crown a new IPW Unified Champion. 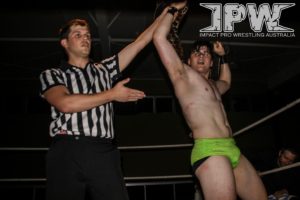 This year’s Hawk Distinction Trophy winner, SledgeHammer took on fan favourite and high flyer, the masked Bojack. This match was worked very stiff. Both competitors gave everything and Sledgehammer came out on top. Bojack was not happy, cleary angred by the result as he left the ring. 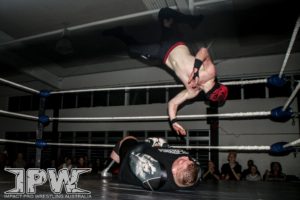 Next up was IPW Heavyweight Champion, Obie Cartel taking on Luxford. Luxford only got this opportunity by putting Obie in a sharpshooter at the end of the previous show, refusing to let go until commissioner Jase the Ace would gave him a title match. 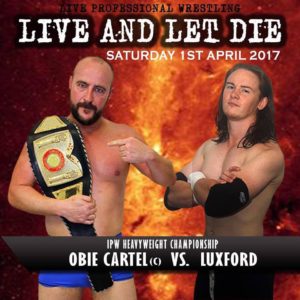 Obie and Luxford are two of the best wrestlers in the company and didn’t disappoint with this match. There was chain wrestling, high spots and false finishes. It came to a conclusion when Luxford reversed an Irish whip and Obie bumped referee Chris, taking him out. Luxford then hit Obie with a Superkick and fell on him for the pin. The whole crowd counted to three, but ref Chris was down for the count and unable to count the pin.

Luxford’s tag team partner Dalton Briscoe then entered the ring with the title belt and handed it to Luxford. Briscoe then picked up Obie telling Luxford to hit him with the belt. Luxford instead dropped the belt on the ground, realising he didn’t want to win it that way. Briscoe then pushed Luxford who then hit him with a superkick, knocking Briscoe out of the ring. Luxford went over to check on Briscoe and Obie rolled up Luxford and ref Chris counted the pin. Your winner and still IPW Heavyweight Champion Obie Cartel. 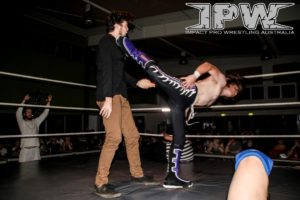 Obie then grabbed the mic and told Luxford that he liked what he saw tonight, it was the old Luxford and then told him he could have another title shot next month if he wanted it. Both men shook hands and Luxford accepted the title match for next month.

We then had two rookies making their IPW in ring debut. Bodhi Jackson and Ryan Grayson came to the ring, the bell rang and they locked up….. then we heard Skhorn’s music. The Viking Warrior makes his way to the ring and the rookies look panicked standing in the ring. Skhorn beat down the rookies, then cut a promo on CJ Chris Johnson. CJ beat Skhorn in their last meeting and Skhorn wasn’t happy that a 2nd year pro has no respect for a guy who has been around for over a decade.

Skhorn then beat down the rookies some more before exiting the ring. Looks like Skhorn v CJ Chris Johnson could be on the cards again very soon. 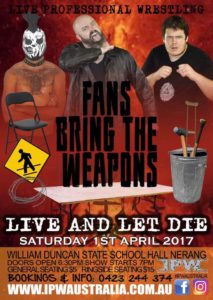 Then we came to the main event of the evening, and what a match and swerve we had to finish the show. IPW Hardcore champion the masked Reaper defending his title against the insane RIP in a Hardcore match.

This match was insane and both wrestlers definitely took it to the “extreme”. There were barbed wired tables, street signs and Reaper even jumped off a two and a half metre high storage room roof onto RIP. 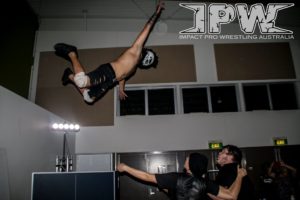 RIP then put Reaper through a table on the outside of the ring and Reaper looked like he was done. RIP was telling ref Troy to give him the title as Reaper should be giving it up ’cause he was beat down so bad.

RIP had Reaper down in the ring when Reaper’s long time Tag partner Bojack made his way to the ring with a chair. Bojack was holding the chair ready to hit RIP telling him to stay away. Bojack then helped Reaper up and hit him with a blue thunder bomb! Bojack had just turned on his long-time friend and tag partner. RIP pinned Reaper to become the new IPW Hardcore Champion. 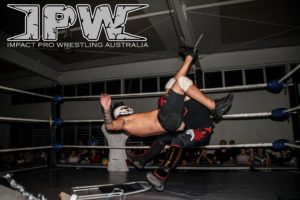 Bojack then knelt down over Reaper, grabbed Reaper’s mask to pull it off and reveal his face to the world. Bojack then unmasked himself and posed with RIP yelling “This is our time, now!”

Awesome card from start to finish! Do yourself a favour and get down to William Duncan State School on 6th May for the next Impact Pro Wrestling show. You won’t be disappointed.

By Greig Tansley on December 8, 2016 in Interviews, IPW Australia, Podcast

Once was never going to be enough.

The guys open up about what drew them to wrestling, today’s product, their personal favourites and much more.

Once again, be prepared for accents aplenty, and the occasional background BUMP.

By Greig Tansley on September 9, 2016 in Interviews, IPW Australia, Podcast 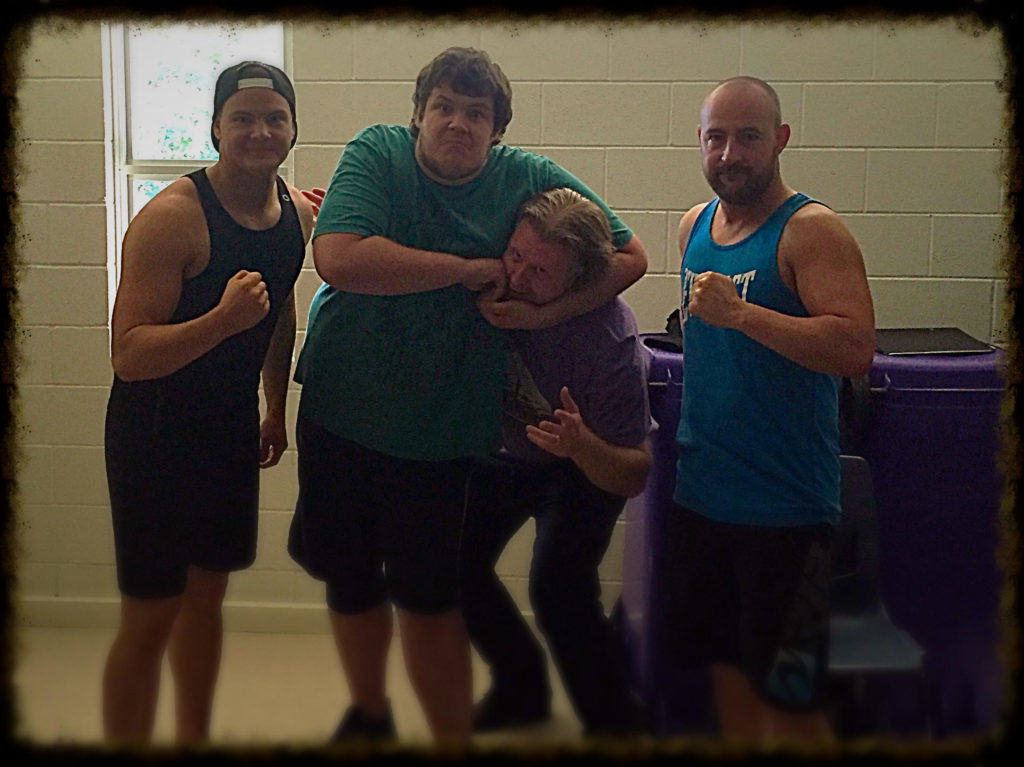 PS – Due to being backstage while the roster was testing the ring, there are quite a few loud bumps in the audio here & there. Apologies.

You have been warned…