Survivor Series Results – Where Do We Go From Here?

By Joshua Schlag on November 24, 2013 in Commentary, Survivor Series 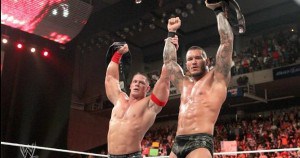 Everything old is new again.

I didn’t want to do it. I just didn’t want to order Survivor Series, but I felt like I had to. WWE didn’t exactly do a great job in building storylines to make us, the fans, emotionally involved with.. well, really anything going on in WWE right now. No, the John Cena ‘return from injury’ story didn’t hook me. No, I don’t give a crap about Big Show; and yes, I’m still stuck on how Daniel Bryan was unceremoniously removed from the title picture. I know I’m not alone with that opinion, but more on that later. The Survivor Series matches were a bit thrown together, but that’s how they historically have been for the most part. Even a big match I should be excited for, involving the best wrestlers in the company (CM Punk, Daniel Bryan) and a man whose words are ever intriguing (Bray Wyatt), felt like it was sloppily thrown together with no real end game in sight. Can you blame me for not being sold on any of this?

Not because of excitement for the event itself, but because of tradition, we bought the PPV tonight. For the last few years, some friends and I have gotten together the Sunday of Survivor Series to cook up a delicious turducken and watch some football followed by professional wrestling. Turducken Sunday is a big deal, and we’re not about to change things by skipping out on that last key ingredient, even when the draw just isn’t there.

We had high hopes for the turducken and low expectations for Survivor Series, and frankly – we weren’t surprised.

Tonight, we saw Big Show face off against Randy Orton in a “blockbuster match up” for the WWE Championship. This should be a big deal, right? Well, neither man got a lot of cheers or jeers when their names were announced, and within a few minutes the two of them managed to get a “BORING” chant out of the Boston crowd. How could this possibly happen? Well, since SummerSlam, WWE had built up a storyline that started off as hot and exciting. Daniel Bryan got screwed out of the WWE Championship, and over the course of three PPV’s he kept getting screwed out of it as The Authority groomed their champion, Randy Orton. Ultimately, Orton was awarded the belt, and Big Show was granted a shot at the title without any true conclusion to the “screw Daniel Bryan” storyline. He just had to accept his defeat, and so did we. Frankly, that’s insulting. It’s no wonder the crowd became so hostile during this match – as the “Daniel Bryan” and “BORING” chants grew louder, you could tell it was affecting the wrestlers. Undoubtedly, Vince McMahon himself ordered the match to be sped up – at least that’s the way it appeared. What should have been pretty big moments in the match came in quick succession with a rather lackluster finish (don’t even try to tell me Orton came close to making that punt look convincing) and plenty of time left in the hour.

After all was said and done, John Cena (who had retained the World Heavyweight Championship earlier in the night) came down to the ring to stare down Randy Orton, as The Authority looked on with approval. It’s quite clear that they’re setting up a unification match between these two men sometime in the near future. There are two sides to that coin. On the negative side, do we really want more Cena and Orton? Their feuds from 2007-2009 weren’t exactly awe inspiring, yet here we go again. On the positive side, we’ve complained on more than one occasion about the dilution of championship status in WWE. With so many belts, and really just one weekly show (SmackDown isn’t really used to advance story lines the way it once was), the World Heavyweight Championship had become a second tier championship, on par with the way the Intercontinental Championship had historically been seen. To eliminate the WHC would give more meaning to the IC and even to the other traditional “mid card” belt – the United States Championship. Ultimately, I hope that is the case. Do we have to sit through another Cena / Orton feud to get there? It seems to be the case. But another positive spin on this situation – it’s not something that’s likely to be dragged on to WrestleMania. This will play out in the coming weeks, with some sort of false conclusion at Tables Ladders and Chairs in December – and with an undisputed champion finally crowned at the Royal Rumble, just as the Road to WrestleMania starts to become clearer.

Maybe that gives another opportunity for Daniel Bryan to become involved. Maybe not.

On to the rest of what we saw tonight, which overall provided some pretty decent matches, for what it’s worth:

As a final point, this in itself is a shining example of what’s gone wrong with WWE. Character development and well crafted plots can work in pro wrestling. Look at Survivor Series 1998 – Deadly Game, for a prime example. The championship was in peril, just as it is today. Many storylines were built up to converge as a single elimination championship tournament was booked to crown the new champion. Mick Foley and The Rock’s characters were built up, as Stone Cole Steve Austin suffered the brunt of an imposing regime. There were intriguing plot points and some gargantuan swerves by the finish of the event, and we were left with a scene that got people talking and excited for watching Monday Night Raw the following night.

The level of excitement going into the newly developing unification picture isn’t anywhere on the same level as it was 15 years ago. The talent worked their butts off tonight to try and overcome issues with creative and lack of compelling storylines. There’s only so much they can do, though. It has to be effective on both the creative side and with the in ring product. WWE’s got some work ahead of them if we are going to come around.