In the long standing tradition of respected sports writer Bill Simmons, I present to you… The Steel Cage Mailbag! This is essentially where emails go when we just don’t have time to read them all on our weekly podcast. Well, let’s just get started, why don’t we? 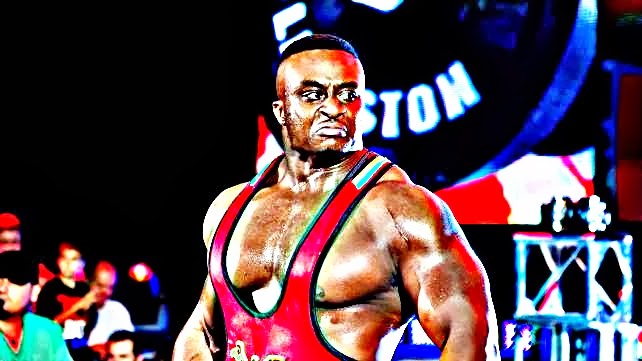 Earning his stripes in Florida, exposed nipple and all.

Mick, Australia: I was thinking while watching raw, couldn’t WWE have chucked Big E in the ladder match to kinda represent Ziggler? Not sure how stupid that sounds. They could’ve still put the belt on the line and maybe have AJ go up to grab it. Dolph could’ve played a part without contact (just running in and pushing the ladder or something). It might’ve made it a tad more interesting. Thanks, and fuck JTJ (Jared The Jew)!

You know, the first time I read that, I didn’t catch the last bit, and assumed JTJ was a typo for JTG. I was beginning to wonder why all the hate for the guy, outside of the fact that he makes probably close to six figures and just gets to hang out eating catering every week while Zack Ryder gets squashed.

To your point about putting Big E in the ladder match… That’s an interesting point, but man – that’s putting a lot on a guy who they’re quite honestly still developing. There’s a reason Big E has barely had any time in the ring on regular TV – he just needs more polish, which he’s getting down in Florida as NXT Champion. I, for one, think that anything less than that triple threat ladder match they originally booked would have been a step down – so they can at least let two guys with legitimate submission holds showcase their talents. ADR and Swagger are both pretty competent in the ring – though the build up is lacking (not their fault in this case.. well maybe a bit Swagger’s fault as he caused the concussion).

Will, UK: What do you guys think are the worse WWF/E characters of all time?

I feel like this is a running theme of our discussions, where we bring up classics like The Gobbledygooker, The Shockmaster, The Repo Man, and Kizarny. In fact, it is so much a part of our fandom that we held a Facebook tournament last year to crown The King of the Zing, with the honors going to that lovable carnival freakshow. It might just be time to start putting together the 2013 brackets! Thank you for the reminder, Will.

CJ: I’ve been thinking a lot about dream matches. A couple of matches I would love to see include Bret Hart vs. Kurt Angle or maybe Ziggler vs. Mr. Perfect. So what are some dream matches you guys would pay to see?

Thanks for writing in, CJ. It’s a shame that both of the matches you listed there are physically impossible, though I am sure that if anyone can wrestle a corpse and make it look good – it’s Dolph Ziggler.

One match I really wish we could have gotten, that we got a slight nod to at this year’s Royal Rumble, is Cody Rhodes vs Goldust. Both guys are immensely talented, and the chemistry that two brothers can have in the ring together makes for huge potential. On a much grander scale, as something we might actually see one day (pending medical clearance and all that jazz) is CM Punk vs Stone Cold Steve Austin. Two outspoken characters who would abuse each other on the mic as well as they could in the ring. Seeing the build up for such matches would be just as, if not more, exciting than the actual matches themselves.

Austin over Punk, easily. It has historical significance probably bigger than losing to The Undertaker. Punk / Austin would be a clear main event type of match at least on the same level as whatever Cena would likely be doing with the WWE title. Punk has staked him claim as one of the best WWE Champions of all time with his historic reign that ended this January – a match with Austin – win or lose – would be a great accomplishment to add to the record books.

In case you haven’t seen it, here’s the Punk / Austin interview they recorded last year to promote the WWE 13 video game: