By Joshua Schlag on February 19, 2009 in Commentary 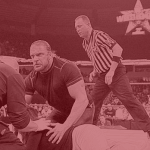 As I watched Raw on Monday night, I totally called the Stephanie attack leading up to Triple H arriving on the scene. It’s the perfect way to move Orton over to Smackdown to have a rivalry with Triple H for that belt, leading to Wrestlemania!

True to WWE’s latest trend of trying to blend reality with kayfabe, they have (finally) acknowledged Triple H’s marriage to Stephanie on air.

Let the Speculation Commence!
Wrestlemania XXVI to be held in Glendale, AZ