By Joshua Schlag on July 2, 2014 in Podcast, RAW, The Steel Cage Podcast, WWE

Are the Monday Night Wars back on? That’s sure what this week’s installment of Raw felt like! Multiple returns, crazy swerves, fun action, and even a title change! It’s going to be a challenge to narrow down the top highlights – from Chris Jericho to Jack Swagger to AJ Lee to Seth Rollins… and more! Crazy. Crazy crazy.

I need a cigarette. 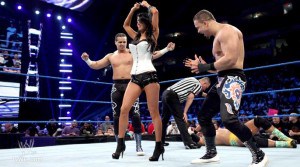