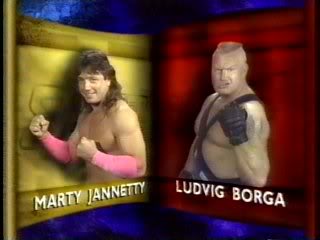 Forget that this is a match against the two favorite sons of The Steel Cage “Broadcast” for a second.  This match had more than two wrestlers tangoing for a few minutes solely to fill up necessary time commitments.  It had The Fink.  It had Bobby Heenan calling the match as a true heel announcer.  It had Vince McMahon saying what he wants to be said into a microphone instead of radioing to the announce team what he wants to be said.  It had more story behind it than 50% of what’s on Raw in recent weeks.  This came from a time when Vince didn’t have a 3 hour prime time block every week in addition to a baker’s dozen other shows for no other reason than the fact that KidsLoveCena.

This is a match that meant something 20 years ago.  Remember that there weren’t pay-per-view extravaganzas for Vince McMahon to pitch to you on a monthly schedule.  Hell, Vince sometimes finds a way to wedge two into a single month these days.  This was before WWE had even begun to sell their shorter “In Your House” events.  You can tell.  I didn’t watch this match when it happened.  I didn’t have cable at the time, and my friend who occasionally got wrestling PPVs as gifts didn’t have a summer birthday.  Instead of watching a video montage about the video montage’s video montage to learn what happened to set up this match, I listened and watched.  The wrestlers told a story in the ring while Heenan and McMahon placed it in proper context.  It could have been out of a textbook, and it was great.

Within the first few moments of the match I knew what was going to happen.  Poor Marty didn’t stand a chance.  Borga, the newcomer, was undefeated and had been for about two months.  Painting Jannetty as a former Intercontinental Champion helped take some of the shine off immediately.  Heenan and McMahon drew comparisons to the then-still-undefeated Tatanka.  The heel and face announcers dueled to prop up and put down Borga’s present state as equivalent or inferior to Tatanka.

But this match wasn’t a complete squash.  That’s not why the match was happening.  Borga needed to be put over, and Marty fell on his sword (his own, not Borga’s).  How do you prove to the fans that Ludvig was tough?  How do you show them that they should be fearful if their favorite face squared off against him?  Let the offense of a respectable opponent, not a champion in a non-title match (are you listening Vince?), stagger him.  Jannetty’s two super kicks weren’t enough to level the Finnish brute, they made him stronger.  Game over.

Really, the idea isn’t that this is how every match or feud should go, but it’s refreshing to know that somewhere Vince has shown that he can produce a product that isn’t fueled by social media and a host of television programs.  That’s the entertainment that I want.

Circle the wagons.  Sign the treaty.  This post’s over.