So… That Happened: The Undertaker, First and Final

This April, one of the WWE’s most integral players and longest stalwarts seemed to finally step away from the Squared Circle. Perhaps it was a certain degree of inevitability, or the years of opinions that centred around “maybe it’s for the best” or simply that I watched it with a group of friends running on candy but all still burnt out by the end of the seven hour event, but the Undertaker’s swan-song didn’t quite have the impact it should’ve. That being said, now two weeks removed from it the feelings have begun to set in. He was easily one of my favourite superstars so in this instalment of “So… That Happened” I’ll be doing something a little different and celebrating his career by looking at both ends of it; the first and final appearances of the Deadman at each of WWE’s four marquee events.

And hey, can I suggest a little background music? 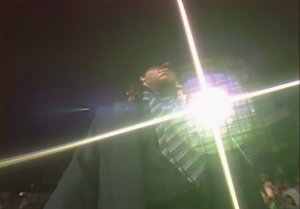 The Undertaker famously debuted at Survivor Series ’90 [WATCH: Survivor Series 1990, on the WWE Network] as a surprise entrant to a traditional team-based match by aligning himself with Ted Dibiase. Skulking slowly to the ring, accompanied by the-manager Brother Love, the commentary put him over as a huge specimen and potentially not even human. Undertaker followed this by making very quick work of Koko B. Ware via Tombstone and the American Dream Dusty Rhodes himself (after a double axe handle from the top rope, of all things). After the latter left the ring, Brother Love began to kick him whilst he was down and Dream defended himself; causing the Undertaker to give chase down the aisle ending in a count-out elimination to keep the newcomer strong. He came, he saw, he kicked ass but he wasn’t given the keys to the kingdom immediately. 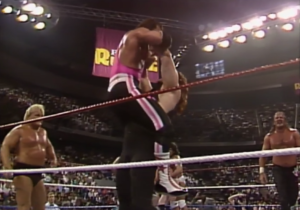 Still, reaction to the character was strong and thus in the WWF’s next pay-per-view Taker was given near fifteen minutes to strut his stuff at Royal Rumble ’91 [WATCH: Royal Rumble 1991, on the WWE Network]. Entering at #12, the Deadman staked his claim and showed the company’s belief in him by almost immediately eliminating crowd favourite Bret Hart before digging his heels in for the long haul. After two more eliminations (Texas Tornado and Bushwacker Bruce), Undertaker was finally tossed over the top-rope by both the Road Warriors, proving that it took two men to take on the Demon of Death Valley. 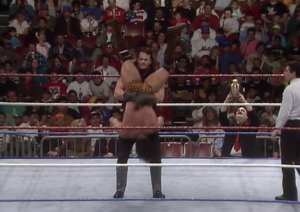 Continuing to WrestleMania VII [WATCH: WrestleMania VII, on the WWE Network], Undertaker was given another face like Bret to destroy at the Showcase of the Immortals in “Superfly” Jimmy Snuka. There are complaints these days about the number of matches on a WrestleMania card but WM7 had 14 matches on the main show compared to WM33’s 12 and two less hours to work with. Thus, to mark what would eventually become known as The Streak, Undertaker steamrolled his way through Snuka. Finally paired with iconic advocate Paul Bearer; not only is this Undertaker’s debut WrestleMania match but it’s also his first singles PPV match and the growth in his confidence was very visible. In the five minutes given, Taker pulled out his signature moves and walked away a decisive winner with the crowd steadily getting behind him. 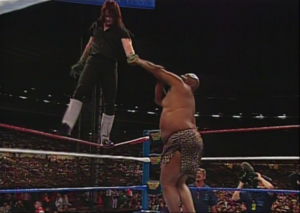 Strangely, Undertaker was not booked for the main show of SummerSlam that year and so his first appearance on the final of the Big 4 shows was at SummerSlam 1992 [WATCH: SummerSlam 1992, on the WWE Network] where he was lined up to face the first and definitely not the last appearance of terrible racial profiling on “So… That Happened” in Kamala. The best thing about this match was Undertaker’s entrance where he walks out to a huge pop, after having officially turned babyface February that year. Sadly, we have to end this section of the article on a downer since this bout was a total cold fish. The two had very little chemistry and Kamala’s size made it difficult for Undertaker to get any of his traditional move-set in, limiting him even further (let’s face it, early ’90’s Undertaker was hardly his prime in terms of ring prowess). The scuffle ends in a flat 3:27 due to disqualification and Kamala continues a beat-down before Undertaker does his signature sit-up to scare him off. On the bright side, this feud would lead onto the first televised Coffin Match but it would also introduce the WWF to Giant Gonzalez and his matches with Calaway make this turd look gold-plated in comparison. 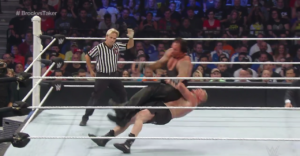 Appropriately, the first of the four pay-per-views we have to look at for the last run of Mean Mark Callous is the final one he tackled in his formative years. SummerSlam 2015 [WATCH: SummerSlam 2015, on the WWE Network] was essentially billed as Undertaker’s attempt at vengeance against Brock Lesnar who broke his undefeated WrestleMania streak 16 months or so earlier. The match itself was definitely stronger than their original (due to far fewer in-ring concussions) but closed with a total clusterfuck of a finish where the timekeeper believed he saw Undertaker tap, erroneously called the match as over and caused Lesnar to be distracted long enough for the Phenom to lock in Hell’s Gate and cause Brock to pass out rather than submit. Ironic that Undertaker’s first and last SummerSlam bouts both have questionable ends. The match sits in the middle of the feud in terms of chronology and quality; not quite the awkward mouse-fart that was the streak-ending Wrestlemania XXX bout but outdone by the successive and excellently brutal Hell in a Cell fight next month. 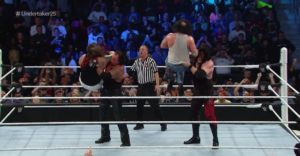 Summerslam 2015 was the Undertaker’s first PPV match outside of WrestleMania for five years but he soon followed it up with appearances at both Hell in a Cell and that November’s Survivor Series, which was marketed with the line “25 Years of The Undertaker” [WATCH: Survivor Series 2015, on the WWE Network]. Things were off to a shaky start to begin with as the Deadman was placed into a feud with the man he had overcome six months earlier with The Eater of Worlds. The upside was the idea that Wyatt and his spooky cronies had overcome ‘Taker and his brother Kane, somehow stealing their supernatural gifts and finally offered the possibility of a reign of terror. Until the Brothers of Destruction hobbled out on Raw a mere two weeks later. The two faced Bray and Luke Harper in a ten minute tag match that was fairly average despite the entertainment value of seeing Undertaker at what could be described as home turf taking out every member of The Wyatt Family alongside Kane for what would clearly be the last time. The real issue back then was the sloppy booking before and after the event and the WWE’s intent to incorrectly book Bray Wyatt well, but at least it stands up as a nice salute to ‘Taker in retrospect. 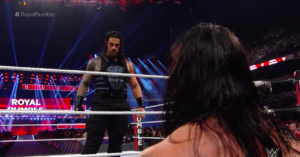 Fast forward over a year to early 2017, where Undertaker would make clear his intent to enter the Royal Rumble where he had “dug 29 holes for 29 souls” despite appearing in the match for a little over five minutes and making four eliminations [WATCH: Royal Rumble 2017, on the WWE Network]. Even with declining performance quality over the last half a decade or so, it was clear that Calaway was at the end of his rope; struggling, and obviously in pain, performing even the most basic manoeuvres. Despite the streak being over, a match with Undertaker itself would be an in-built feud for any superstar and it was really not the work of a brain surgeon to put Roman Reigns in that position by having him eliminate the Deadman and yelling something along the lines of “YARD WARS” as he did so. 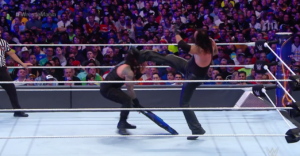 With the Phenom on his way out, it made sense to put a newer star over as big as possible. With it being the incredibly protected Roman Reigns however, despite your opinion on the character, it was fairly evident that the Undertaker would be taking his second and in all likelihood final loss at WrestleMania [WATCH: WrestleMania 33, on the WWE Network]. The bout itself was arduous at the best of times and painful at others with Roman Reigns failing to reverse ‘Taker into a tombstone of his own and the final move being a Superman Punch powered by an extra rope-bounce. With the stench of inevitability all over it and the Undertaker’s decreased in-ring ability, the match was fairly disappointing. However, it was the generic story that really dampened Undertaker’s final showdown. The feud could’ve and should’ve had a little more added to it beyond  “I’m going to piss on your petunias, and that makes them mine”. Instead, the entire thing felt hot-shotted, rushed and, for a larger than life superstar like Mark Calaway, far too run of the mill like a lot of his formative feuds had been. 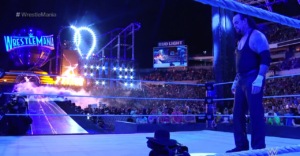 So despite having its moments, the overall last handful of years of Undertaker lead up to something rather sour that provided very little beyond a “well, that’s that” when he finally took off the hat and cloak. Which is a shame because the man has offered his life and body to the company for more than quarter of a century. For a good number of us, there has not been a time in wrestling when the Undertaker wasn’t there (at least every April) so it’s sad to see him start to fade in his final years. For everything he had done, for every great moment; he deserved better. Here’s to you, ‘Taker. Rest in peace.