By Psyniac White on February 3, 2017 in Nostalgia, So... That Happened, WWE Network

When non-fans mockingly cry “it’s fake” at people like you and I they don’t realise that “its fake” is simultaneously the best and worst thing about wrestling. On the one hand, how frustrating is it to explain to people that it’s just like any other show on TV? But on the other… it’s a good thing that it isn’t real. Wrestling has the fortunate ability to backtrack or change gears at any given moment if things aren’t going as planned. “So… That Happened” is a column devised for looking back into the annals of history and bringing certain things to light. Sure, everybody knows about characters like Gilberg or the Gobbledegooker… what I’m talking about is the stuff that wrestling tries to walk away from whistling innocently and most often gets away with it. 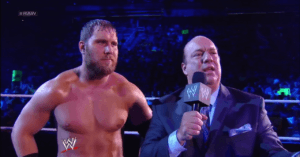 Following Extreme Rules 2013, Brock Lesnar left the WWE stating that he had conquered everything in the company (hilarious considering what would transpire two years later at WrestleMania… not quite, Brock). This left his advocate Paul Heyman, at least the WWE felt, with some free time to use. Not content with him just managing CM Punk, everybody’s favourite manager was to introduce his new “Paul Heyman Guy” on the May 20th edition of Monday Night Raw.

Rewatching the segment, it seems as though if this was Curtis Axel’s true, blue debut there would’ve at least been intrigue. This is the most charismatic Axel has looked in his career; skulking down to the ring after Heyman’s introductory spiel with a cocky swagger and a maniacal laugh. His pedigree is highlighted, he has badass music, he sports a confident look about him and the commentators try to put him over big. Unfortunately, the crowd in the arena and everyone at home looks at him and only sees Nexus’ Michael McGuillicutty. 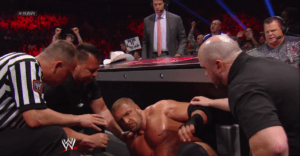 Unfortunately, things go downhill for Curtis Axel starting the night of his debut [WATCH: Monday Night RAW – May 20, 2013, on the WWE Network]. Triple H, who was Brock’s victim the previous night at Extreme Rules, comes to the squared circle to confront Heyman. He pays no mind to Heyman’s promised and prized competitor until he has to; knocking him to the ground in one, solitary bitchslap and then challenging him to what seems like a squash match later in the show. The match, when it arrives, is fairly standard outside of its totally absurd finish. Triple H loses due to a stoppage when he begins to kayfabe suffer concussion symptoms presumably brought on by his match with the Beast Incarnate that Sunday. Axel defeats the Cerebral Assassin on his first night in WWE… but by technicality. So is it a mega-push or not?

The next week things continue to be confusing when, at the behest of Heyman, then WWE World Heavyweight Champion John Cena agrees to face off with Curtis Axel [WATCH: Monday Night RAW – May 27, 2013, on the WWE Network]. Amazingly, “The Axe Man” would gain a victory over the champ but unfortunately, it would be achieved somewhat unceremoniously with Cena walking away due to an interruption by Ryback. Things get worse yet seven days later when Raw opened with Stephanie announcing Triple H would not be allowed to return to the ring (leaving that story strand unresolved) to compete against Axel who, in her words, is beneath him. 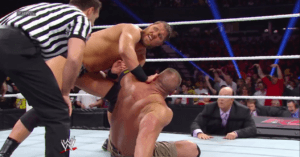 Later that night, Curtis is booked in a rematch against Big Match John and, to mix things up, it’s made a no-DQ bout [WATCH: Monday Night RAW – June 3, 2013, on the WWE Network]. At the finish of the match, Cena is preparing to throw Axel through a table when he instead decides to swing his fists at a begging Heyman. Chasing him around the ring, John runs into Ryback who proceeds to spear his Payback opponent through the table instead. Axel then wins by count-out, a rule that doesn’t even apply in no disqualification matches, and in three weeks of being rebranded has one win over Triple H and two over John Cena.

From here, Axel moves into the Intercontinental Championship picture and, as we all know, secures the belt for a number of months. His time at the top is over immediately and these storylines are never fully tied up. In November of 2013, he officially steps down as a “Heyman Guy” and disappears into obscurity (at least until Royal Rumble 2015). 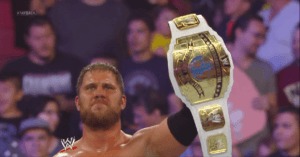 It’s never been clear to me whether WWE was seriously pushing Curtis Axel or not. At the time it seemed it but looking back on it now, as a complete package, it seems like a pointlessly elaborate rib. He’s introduced in a fashion that is anything but impactful and yet is somehow cooled off further with several wins gained by pure circumstance rather than dominance. His time at the Intercontinental Championship level suffered because of it and it’s hard not to think that had he been introduced with a genuine mean streak and the goal of claiming his Father’s famous prize then he could’ve made a stable mid-carder with more potential. Throwing him in at the deep end then draining the pool on the same night is such a ridiculous booking decision that it leads me to believe they never, ever wanted Axel to get real heat.

But hey, it could be worse. The only memorable thing about Ryback’s time with Paul Heyman was getting kissed on the cheek.