Why Do Wrestlers Wrestle?

By Joshua Schlag on December 6, 2013 in Commentary 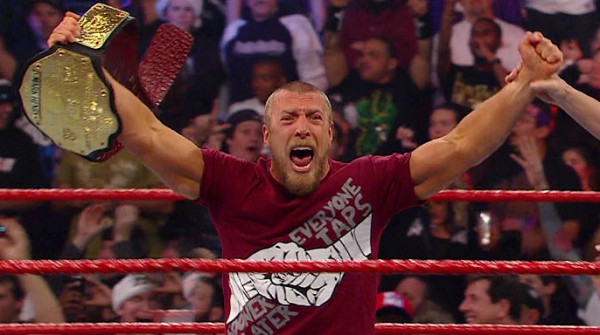 When I was a kid, it always seemed clear to me why professional wrestlers competed on a weekly basis:

This vision may be extremely clouded by wishful hindsight and a limited attention span as a kid, but it really seemed that way to me back in the 90’s. It seemed pretty clear that a random match between Tatanka and Ludvig Borga had implications – winning that match would put either guy in better position to go after the Intercontinental Championship. Getting to that championship would be a major stepping stone to maybe one day competing for the WWE Championship, which seemed to be everyone’s goal in the company, farfetched or otherwise. Along the way to championship gold, alliances would form, alliances would break, and Tatanka would fight IRS on his continued quest to move up the ladder to his next big opportunity.

These days, it really seems like the reasons wrestlers compete on Monday Nights is a bit off:

There’s no doubt that the awkward rivalry between The Miz and Kofi Kingston will continue for a bit, but why? Kofi, as talented as he is, has been doing nothing but losing matches for the most part in recent months. Shouldn’t he be frustrated, and fight extra hard to prove his worth and get his name into the Intercontinental Championship picture or United States Championship picture? The Miz was once WWE Champion, but he doesn’t seem to show any outward desire to compete for gold anymore – the occasional Miz TV segment seems to be enough to placate any desire of advancing his career.

The WWE keeps a weekly Power Rankings list on their website, but why? They never talk about it on the air, and it usually seems rather arbitrary as to why wrestlers are ranked the way they are. Maybe this is why we don’t see tournaments like King of the Ring, or #1 Competitor stories having a slow play over the course of weeks / months. The allure of championship gold just isn’t something that sells tickets and PPV buys. I don’t know. But from a storyline perspective, it’s an easy tool to make things compelling, and it just isn’t utilized very often anymore.

Remember CM Punk’s 434 day reign as WWE Champion? Why’s he nowhere near the John Cena / Randy Orton title discussion? Why isn’t Daniel Bryan, who never got his fair chance after months of being kicked in the teeth by The Authority? Sure, there’s plenty of attention to be paid towards the current top champions, but why not develop an interesting hierarchy of competitors beneath them, who are in clear position to jump in as soon as they get a chance? Daniel Bryan and CM Punk should be angry they’re not in that title picture – instead, they’re having these oddball feuds with the likes of The Shield and The Wyatt Family.

I’ll bring it all around a bit here, though, on that last sentence. It is quite possible that this is all a slow play by The Authority, utilizing both The Shield and The Wyatt Family, to keep top stars down while their own manufactured championship match plays out. Maybe once Punk and Bryan emerge from those fights, they’ll finally say that enough is enough.

Yeah, I guess I’m an optimist after all. I’m a frustrated optimist. Enough is enough, and it’s time for a change.