Another week, another bunch of emails that were too long or too ridiculous to make the cut for the podcast. Keep ’em coming, guys. 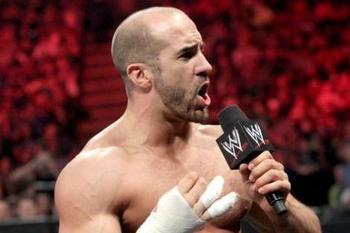 Bringing the W, but not so much the E.

Em Kay (@mkpred): Antonio Cesaro stopped yodeling and I think he is up for a push again. After Ryback is done with Cena, who will face Cena for the championship? I don’t think Ryback will win the title during this feud.

I think Cesaro is a good contender for the Title, but I don’t trust the writers with coming up with a decent story for him against Cena. So I think The Perfect Way would be to give the Raw Money in the Bank to Cesaro and build him up until he cashes in. Do you think Cesaro is ready for the spot yet or perhaps another year should go into work?

I am sure it wasn’t meant to draw attention, but I find it peculiar that you capitalized ‘The Perfect Way’ in your Cesaro booking scenario. Though he’s a relatively fresh face, I feel like Curtis Axel (son of Mr. Perfect, of course) has taken the spot many of us thought Cesaro might take. Both Cesaro and Axel are very well rounded in the ring and their talent with in-match storytelling alone should be able to take them far in their pro wrestling careers. At this point, however, they both have their struggles on the microphone – and with more emphasis on ‘The E’ than ‘The W’, that’s a critical component.

The addition of Paul Heyman I think might fast track Axel to top tier feuds, allowing him to showcase his talents while Heyman generates the heat a big time heel would need.

Back to Cesaro, I am glad that the yodeling has been dropped. It was embarrassing and not terribly interesting. He needs the ability to showcase his talents, and to a degree I am disappointed that he didn’t get his shot to make a run with Heyman. Hopefully they’ll find the right thing for him soon.

Carter (@CarterJacobs3): I have created an idea for a Steel Cage inspired WWE stable. Here we go.. The Second Coming of the Three Man Band (screw Drew McIntyre):

These three men would rock the very core of the WWE. And, they would be managed by one of The Steel Cage’s mascots: Marty Jannetty.

First of all, Marty Jannetty is not a mascot. He is a man who just so happens to love his beer and doesn’t have a ton of self control. That said, he’s perfect to join up with 3MB and show them how it’s done. Rock and roll, babay!

I think we’d all be on board with Heath Slater – the guy had a fun run last year against all of the legends, and I do miss him getting at least a bit of the spotlight these days. Plus, he can work pretty well in ring and sell some pretty crazy bumps. Awesome enhancement talent, if nothing else.

Regarding Jinder Mahal, I think my interest in him lasted a week or two tops.

Tensai, of course, could play any role he wants – ANY ROLE HE WANTS, DO NOT QUESTION ME – but I don’t think this is the right one for him. He was doing well as a big tough guy working crazy stiff matches. I miss those. Sweet-T is, well.. something, I guess. He gets on TV and the children will cheer him. I just yearn for the day when he turns on Brodus and spits green mist in his eyes. He’d never be able to wipe it out with those T-Rex arms, and of course the Funkadactyles will become Miss Tensaite #1 and Miss Tensaite #2.

Back to the first thing you said.. Why the hate for Drew McIntyre? I think he plays his role pretty well – ridiculous and over the top. I don’t know if he’ll ever regain ‘golden child’ status with Mr. McMahon, but I’d love to see him doing something semi-relevant again. Folks always talk about how thin the roster is, but they could easily let some new storylines flourish – especially if they reinstated the brand split – but that’s a whole other topic.

Ian (@mr_lolo_jones): Ok so I think i’ve finally finished tinkering with my wrestling persona if i ever made it into the E.

I’ve got super annoying music, and I randomly keep coming out during different segments confronting guys.

ME – “Randy, I’m sick to death of your stupid pose, I want a match, TONIGHT”
Randy – “Uh dude, you already have a match with Big Show tonight”
ME – “I do?” *sulks back to locker room*

NEXT SEGMENT
Cena is chatting shit about some clown he is going to bury at the next PPV..
Cena – “One of my legs may have fallen off, but I’m st….”
– super annoying jeer inducing music hits
ME – “Cena, you tire me, lets fight, TONIGHT”
Cena – *super confused face* “uhhhhhhhh…..”

For one episode of raw to get me super over I could just keep coming out in pretty much every segment.

At PPV’s or during matches I could come out to the ring during the wrong matches and just get so confused as to why my opponent isn’t in the ring….

You could further this to the extent where the character can’t remember his own damn name. He could just be ‘unnamed’. Brilliant.

I’m pretty sure this is what they’re doing with Triple H right now.

Summer Kickoff Sale! For a Limited Time, Save up to 60% on Select Merchandise at WWEShop.com!