By Joshua Schlag on January 27, 2009 in Commentary 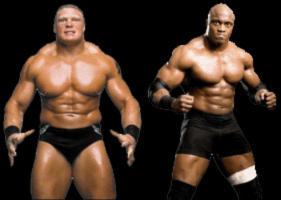 Most of us were aware that when Bobby Lashley made his sudden exit last year from WWE that he would pursue a career in MMA.

Since that time, Lashley has been making the rounds in the smaller MMA circuits. A skilled amateur wrestler, Lashley has the strength and talent to make it. So far, he’s had one TKO and has signed on for another two fights.

Having watched Lashley in WWE for a few years, I expect him to show the same dedication to the sport of MMA that he did to the sports entertainment world. It’s only a matter of time before Dana White signs him and we get to see Lesnar / Lashley headlining a UFC Title Bout..

For more on Bobby Lashley, check out this interview at Sherdog.