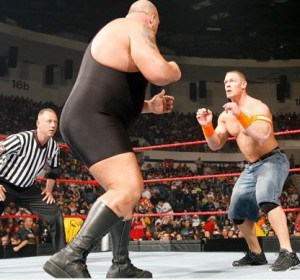 Don’t Be a Star, Be an Adult

For the last couple years, the WWE has run an anti-bullying campaign called “Be A Star”. As an avid rasslin’ fan, I see the ads all the time — various wrestlers stand in front of a white background to talk about how they were made fun of as children. The oddest confession is that from Sheamus, a seven-foot-tall, muscular Irishman with shocking red hair and skin the color of Elmer’s glue. He said that kids called him “fat”. You mean they didn’t go with “ginger” or “paleface” or “my god I can see your heart beating through your translucent chest”? Sheamus’s corner of Ireland had some unimaginative name-calling.

I digress. The Be A Star campaign has been going full-force for quite awhile. In addition to the ads, wrestlers make a lot of public appearances to decry the horrors of being called a mean name. They visit schools nationwide to say yes, I know I can dead-lift a yak, but back when I was a kid it wasn’t all roses. People made fun of me at school! Called me skinny! Called me fat! Never mind that on RAW not too long ago, Triple-H called CM Punk a “skinny fat-ass”. I was amazed that Punk didn’t cry and run away, or at least call Vince McMahon to upbraid Triple-H for engaging in such blatant bullying activity.

Why didn’t it happen this way? Not because it’s wrestling, but because these are grown men who understand that insults are about as harmful as you choose to make them. That’s the fundamental lesson I’ve learned from watching wrestling as a kid. When one wrestler insulted another in a promo for a big match, I never thought “Don’t say that, Stone Cold, you might hurt Undertaker’s feelings!” Instead, I thought, “Careful, Stone Cold, if you make him too mad, you’re gonna pay for it at Summerslam!”

Yes, children should be taught not to insult each other. But the WWE taught me through years of Monday Night RAW that no matter how hurtful a person’s words might be, it’s still up to me to decide how to react to it. Do I let the heel “win” by letting him get under my skin and thus put me off my game at Judgment Day? Or do I “rise above” it and use it to fuel my eventual victory? The WWE’s message for decades hasn’t been “don’t be a bully” — it’s been “don’t let bullies bother you”.

The WWE is embodying this message right now — last Monday, RAW General Manager John Laurinaitis decreed that anyone insulting him or making fun of his (raspy, Super-Dave-Osbournesque) voice would suffer “serious consequences”. Predictably, someone (The Big Show, this time around) was caught backstage making fun of Laurinaitis’s voice. Show was subsequently shamed into apologizing. Repeatedly. It was a pointless set of promos, but it makes my argument more salient because Big Show was the good guy in this situation. Laurinaitis was rightly painted as a thin-skinned asshole who uses his perceived power to build his own ego. In other words, he’s a bully — an actual bully — not some jerk who manages to succeed at making you feel bad.

Originally posted on May 11 at zazzumplop.com. You can follow Darrell on Twitter at @zazzumplop and sometimes (when he’s feeling extra witty) at @nostraslammus