So… That Happened: TLC 3

By Psyniac White on March 8, 2017 in Nostalgia, So... That Happened, WWE Network

The era of the DVD is all but dead, especially for WWE fans. Want to relive any moment? It’s pretty much guaranteed to be on the WWE Network. Unfortunately when you’re living without an internet connection for a week, like I had to recently, you’re left with very few options left for entertainment. Thus, one morning I pulled out WWE’s “The Ladder Match” compilation released in 2007 and hosted by Todd Grisham. One match in particular caught my interest and I found myself thinking “that happened”? Trigger warning: this match contains Benoit and lots of it. 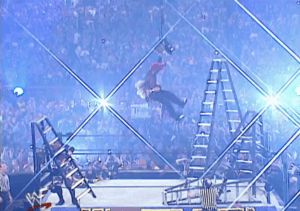 Think of an example of when a casual or former wrestling fan struck up a conversation with you about moments of the past. It’s easy to determine the viewing history of “former” fans; 90% of them seem to have been swept up in the WWF at the height of it’s dominance and then fallen off approaching the end of the Attitude Era. Thus, recounted moments are usually those on the extreme side; Mankind’s fall from the cell, Austin’s crimson-mask face turn and any number of Shane’s various antics. One thing that always seems to come up is the legendary TLC 2 from WrestleMania X-7 [WATCH: WrestleMania X-7, on the WWE Network].

Following the success of a match that more often than not makes it into lists of the best bouts of all time, two months later the WWE attempted to strike gold for a third time with TLC 3. The first wrinkle to this match, however, was that it would introduce another duo to the the WWE’s trio of tag team greats; the Dudleyz, the Hardy Boyz and Edge & Christian. This team, somewhat strangely in retrospect, is Chris Jericho and Chris Benoit. The pair had previously had a strange formation with Benoit losing a match against Angle at Judgement Day due to interference from Edge and Christian [WATCH: Judgement Day 2001, on the WWE Network]. This saw the Rabid Wolverine team up with Jericho in a Tag Team Turmoil match later that evening for revenge and, by coincidence, #1 Contendership. The next night they captured the WWF Tag Team Championship [WATCH: Monday Night Raw – May 21st 2001, on the WWE Network]. 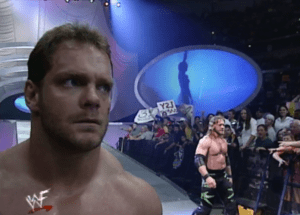 The second thing of particular interest is that TLC 3 was to take place on free TV on the May 24th 2001 episode of SmackDown of all things, just days later. The idea of such a match happening on broadcast television now is fairly laughable; sure, we get the occasional Steel Cage match (especially more likely since the draft extension) but it’s not like they’re busting out the Hell in a Cell for random TV tapings. Whilst Raw’s most recent TLC bout was January 2013, this remains the only time SmackDown has been graced with the gimmick.

The match doesn’t fool around and a series of ladder spots open the competition [WATCH: SmackDown – May 24th 2001, on the WWE Network]. The two Canadians are presented with a subtle layer of sympathy, facing off against three teams who have TLC experience (and a promo to open the episode from Vince who believes they have “run out of miracles”). Before too long, Benoit dives through a table on the outside and is stretchered out of the arena. After a few spots, including a savage suplex off the ladder from Bubba to Jeff, Benoit makes his way back to the ring clutching his ribs and intent on climbing towards the gold.

You may have noticed that one of the three namesake toys of the TLC match has been absent to this point but a two-on-one assault from Edge & Christian fixes that as they bring chairs into the fold to deliver a con-chair-to to Benoit’s ribs. From here, the latter delivers a brutal headshot to Jericho whom Tazz mentions in passing is recovering from a concussion. Grim. Kayfabe or not, whatever the case these things are much harder to see in hindsight. This probably won’t be the last time we revisit unprotected chair shots though, unfortunately.

Further spots in TLC 3 include the out of nowhere use of a TV monitor followed by Jeff impressively leapfrogging from one ladder, over another and down into the announce table, D’von sells a Twist of Fate like he just got electrocuted and finally Benoit ascends a ladder to retain the Tag Team Championship to a glowing babyface pop, despite not really being a part of the competition. This may have been for the best however, as it was revealed weeks later than Chris had sustained a neck injury during the match. 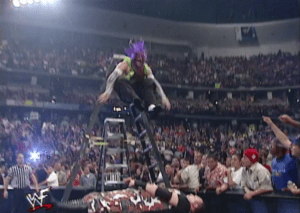 Following TLC 3, the winning duo strangely used their victory to secure world title shots from then-champion Stone Cold with Benoit challenging twice in the very next week. This alone is evidence that, at the time, the WWF knew that the unexpected would keep people tuning in. In retrospect, it seems incredibly scattershot. All in all, TLC 2 remains a good mile out from it’s successor but the third match of the series is still pretty fun, even with some very odd albeit interesting alterations to the formula. Hell, those interesting alterations are what these articles are all about. Jericho and Benoit teamed together in the fatal four-way TLC 3 on SmackDown. Weird, innit?