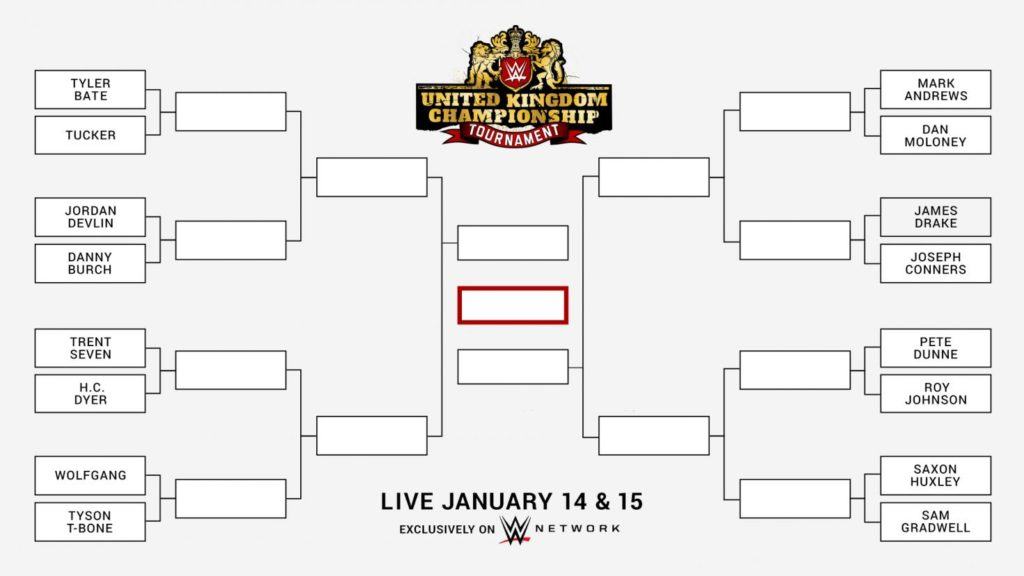 When WWE announced that they would be holding a tournament to crown the first ever WWE United Kingdom Champion, many of us wondered… Why? In fact, I’d argue that’s still an underlying question – and will be, even by the time the weekend is over.

At the same time, though, I looked at this with a fondness not too different from the way many of us felt when the Cruiserweight Classic was announced. I’m excited to see some sweet ass wrestling from across the pond and learn a thing or two about guys who are (almost 100%) new to me. I’m skeptical that I’ll get much out of it, as it will take place over the course of two nights – a much-abbreviated version of a tournament when compared to the CWC. That said, I approach the WWE UKC with cautious optimism.

Before my colleagues Derek (@cap_kaveman) and Mark Anthony (@AnsoniiSan) educate us all on the competitors with their podcast this week, I figured I’d take a crack at the bracket. If I can fill out a fantasy entry for ABC’s The Bachelor, I surely can do this as well.

At a first glance, there are two names out of sixteen that I am familiar with. From his time in Reseda, California, entertaining us at PWG – I know who Mark Andrews is. It was a bit of a nice get for WWE to be able to include him in this tournament, as he is otherwise known for his time at TNA’s Impact Zone.

I am also at least familiar with the name Pete Dunne. That is where my familiarity stops, though. I’ve heard my friends speak of him via Twitter and the like, but I’ve never seen a match of his.

After perusing WWE.com, I found that they did spotlight articles on both of these wrestlers, as well as two others: Tyler Bate and Trent Seven. Well, this is going to be easy! I’ve got four first round picks done! Andrews, Dunne, Bate, and Seven. With apologies to their opponents (Dan Moloney, Roy Johnson, Tucker, and H.C. Dyer), I’m halfway there…

That brings us to Jordan Devlin vs Danny Burch. Burch has actually spent some time with WWE already, as a jobber down in NXT. Somebody there must like him, as they keep bringing him back. Despite never getting over with fans, he must be a good hand at least. Devlin, though, is being touted as a protégé of Finn Bálor. I was already going to pick against Burch – being a good hand isn’t going to get you far, though it may mean a steady paycheck – but knowing about a tie to Balor is more than enough to give the nod to Devlin. Look for this match to be a bit ‘strong style’ as Devlin puts the hurt on the hooligan.

Next up: Wolfgang vs Tyson T-Bone. WTF? Do I seriously have to pick one of these guys? Based on their names alone, I pick Wolfgang. Never bet on somebody named T-Bone. I’m not expecting much out of this one. Surprise me, you two goons.

That brings us to James Drake vs Joseph Conners. If I was to rate them by name, alone, I’d rate it a 1/10 because I’m bored and want to take a nap. After reading up a bit on them, though, I’m kinda excited to see what James Drake has to offer. He’s young and it sounds like he’s done a lot of work to get ready for this tournament. He’s my pick over Conners.

The last match of the first round, then, is Saxon Huxley vs Sam Gradwell. Gradwell looks like a giant baby, so I’m not picking him. Let’s go Huxley!

After actually reading the articles on Tyler Bate and Trent Seven, I have learned that they are collectively known as Moustache Mountain. That’s freaking awesome, right? If you disagree with me, you’re wrong. Because it is freaking awesome. That said, they are both on the left side of the bracket. Do they beat Devlin and Wolfgang to face each other in the semifinals? Yes. Yes, they do. Because WWE. That’s not a complaint, either. I’m actually rather looking forward to the melee of moustaches.

In the match between Mark Andrews vs James Drake, I do believe that they’ll use this match as an opportunity to put Drake over. I’d be willing to bet Andrews is signed to an actual contract and we’ll see more of him on WWE television, and Drake is a bit of a wildcard. They’ll give him a chance to shine in the semifinals on Sunday. Again, though, this is based on very little. I read like a paragraph or two about James Drake and now I’m excited about him. I could be WAY off, here.

That leaves me with Moustache Mountain, James Drake, and Pete Dunne in the semis. I think Trent Seven will go on to the finals, to face Pete Dunne.

Who will win it all? I just literally flipped a coin, because I don’t freaking know. Trent Seven. First ever WWE UK Champion.

You heard it here first! 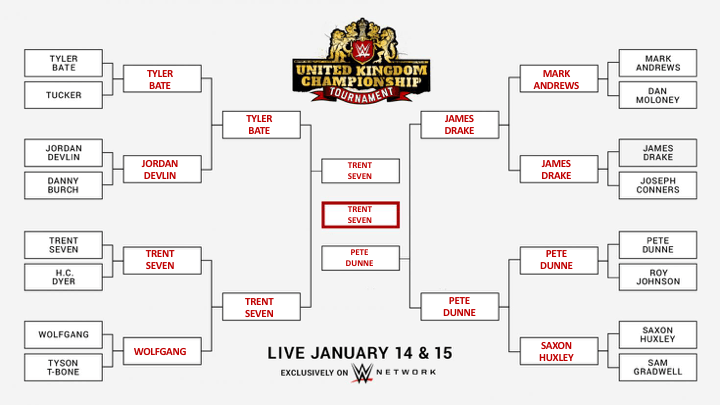