Old School is New School in WWE, Part 2 of 2

I’m back this week with a look at the Shield. Trying to find comparisons for these guys wasn’t easy and I had to do a little more thinking about them than some of the guys mentioned last week. So, how do the Hounds of Justice fare against their historical counterparts?

This one might not be so obvious, but the past Superstar that Dean Ambrose reminds me the most of is Raven. Raven was intelligent but deranged, led a group of men to torment other wrestlers with a sense of justice for perceived wrongs and, what really sells it for me is that he carried his persona throughout the match and even with the way that he executed his moves. Raven was a character that was grossly underutilized in WCW and WWF/E, but his time in ECW established him as a masterful storyteller with a sadistic streak. Ambrose, however, takes this to a whole different level. He has stardom written all over him. While Raven never was able to carry his momentum over to the big leagues, Ambrose already has the respect of his peers and fans alike. Perhaps Raven could have reached this level in today’s era of the smarks, but there is little doubt that Ambrose’s career will soon (if not in the next year) eclipse that of Raven and lead to long term Main Event success. Verdict: Ambrose 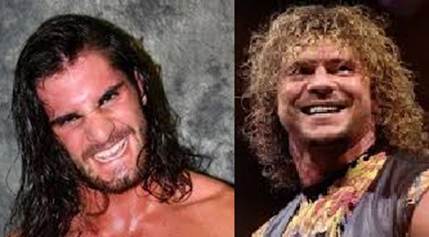 This one may be a bit of a stretch, but hey… it’s my article dammit! This comparison comes mostly from the Shield’s debut match, where Rollins showed a lot of high flying ability and agility. This was what Pillman was mostly known for. Well, other than for being batshit crazy. I preferred Pillman’s time in WCW as both a member of the Hollywood Blondes and as a “loose cannon” (prompting Bobby Heenan to curse live on air at one point when he grabbed his neck) to his similar portrayal in the WWF but, either way, he clearly a very talented performer and was someone who went before his time. I have mixed feelings about whether Rollins will eclipse Pillman. While I said on the podcast that Rollins is somebody that I think has World Champion potential, I doubt that his legacy and reputation will live up to that of Pillman. As a result, I’ve got to go with the Yellow Dog. Verdict: Pillman

Roman Reigns has, in my opinion, been the most pleasant surprise of the last 6 months in wrestling. The skill that Rollins and Ambrose brought upon their arrival to the WWE was obvious but, when The Shield first announced their presence, Reigns was greener than Greenberg. While he started out as the weak link, however, he has progressed quickly both in the ring and on the mic. While he started off more like Adam Bomb, he has since shown the potential for much greater things and could move on to have a run as a freak with a lot of charisma. This is where things get difficult, do I compare him to just Nash’s run as Diesel or his career as a whole? If I were just addressing his WWF run, I would likely give Reigns the nod. Nash, however, matured as a performer and ushered in a whole new era in wrestling as the point man for the NWO. Regardless of what Reigns does, there is so much luck involved with something exploding like that and, even if he evolves into a better all-around performer, the wrestling business as a whole just is not what it used to be. As a result, while I like his potential, Kevin Nash “reigns” supreme. Verdict: Nash

And there we have it, folks. The oldsters take it by a narrow margin of 4-3. While this may seem like an indictment of the young blood, to even consider these guys in the same class as such legends (in some cases, at least :-p) within their first year of competition is quite a compliment. While it is likely that through being misused, injury, or a myriad of other reasons wrestlers don’t live up to potential, that they will go the way of The Miz, Wade Barrett, and countless others that we have hoped would pick up the touch, there is at least some reason for optimism. We all keep waiting for that next golden era of wrestling and, perhaps, these 7 might be a few the guys who will finally take us there!

I have been a wrestling fan for over 25 years and have been a devotee of WWF, WCW, and ECW. I attended live events for each of these companies and has been to multiple PPVs. As a fan of the ridiculous and crazy sides of wrestling, I love Stranglemania 1 and 2 and somewhat miss the days of both Sabu and the Mountie. I also love the storytelling and technical sides (when done well) and my favorite feud of all time is Shawn Michaels and Chris Jericho. A Tensaite and Fandangoon, I make sure to get into Beef Mode every Monday night!
View all posts by Adam Hess →