By Joshua Schlag on December 5, 2012 in Podcast, RAW, The Steel Cage Podcast, WWE

Official word from WWE is that Punk is out at TLC, and we now have a six man tag as the main event. One can only speculate what that might mean for Royal Rumble and The Rock’s involvement, but first – there’s still plenty of other stuff to discuss from this week’s Raw. Teddy Long reversed his usual trend as four men had a great match against each other, AJ looked great, Sin Cara looked capable (though maybe also got hurt), and The Shield again made their mark.

In addition, we play a trivia game about wrestler injuries. No, Bret Hart’s groin injury on Mad TV was not included, sadly. 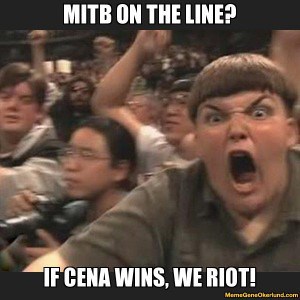 I’m remaining optimistic on this one.

Get Well Soon, Cody Rhodes
The Shield Brings the Sword