Randy the Ram to headline Wrestlemania

By Joshua Schlag on January 26, 2009 in Predictions 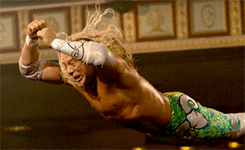 The internet is buzzing today with the big news that yes – Mickey Rourke will be appearing at Wrestlemania XXV. Need a confirmation? Google rourke wrestlemania, and take your pick.

In an interview, Rourke called out Chris Jericho. What all of this means, however, is still up in the air. Will he wrestle Jericho? Will there merely be an appearance and a brief altercation? Regardless of what actually happens, there will be a lot of hype and mainstream media attention.

My dream upon dreams is that WWE will get into contact with Ernest “The Cat” Miller, and book Randy the Ram vs. The Ayatollah. Vince – make it so.