By Joshua Schlag on January 19, 2009 in Commentary 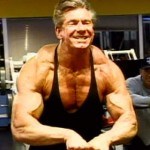 WWE.com currently has a feature to welcome back Vince McMahon back to TV, called ‘Reality Checks’.

There are some pretty good ones that people have submitted.

Vince McMahon was originally going to be the host of The Apprentice, but he fired everyone before they could even shoot the first episode.

I Know You Like My Swagger..
Chris Jericho fired from WWE