By Darrell Johnson on October 29, 2008 in Commentary

Yes, it’s been awhile since we’ve posted. It turns out, keeping a regularly updated blog about wrestling is a lot more time consuming than I expected. I suppose I shouldn’t be surprised, since we’re talking about at least five hours of programming every week (and I tend to work evenings, which makes me less than psyched about writing at night), but foresight was never my forte. Anyway, I have come out of hiding for an important update: a report from Cyber Sunday. 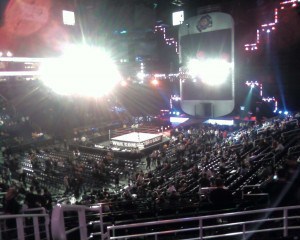 That’s right, I went to Cyber Sunday. The WWE has come and gone through Phoenix too many times for me to ignore it any longer. So with “Functional Jerichololic” sign in hand, I braved the teenage Punk fans, infant Hardy fans, and mouth-breathing Batista fans to finally see what a live PPV was like. And despite the results, I have to say I left satisfied.

The announcers come in one by one. This marks the first (and probably only) time I stand and cheer when Boomer Sooner plays. I was the only one to stand for Matt Striker; he deserves praise — he’s been an entertaining and thoughtful color man on ECW. Finally, Michael Cole got a surprisingly big reaction. I have no idea why.

Lillian Garcia sang the anthem, as she is wont to do. Granted, she sings on key and has decent pipes, but the overblown anthem rendition annoys me every time. Yep, I’m a star-spangled fuddy-duddy.

The ending was a bit too abrupt to be believable, but I was happy to see both of these guys. Shelton and Killings are so athletic, it’s a pleasure to watch them work together. Even with a bad ending, the build-up was fast-paced and the match was entertaining. My only disappointment in this match was with Shelton’s reaction. He’s too good of a performer to get half-hearted heat. That said, Vince has done a stellar job putting R-Truth over. He got a huge roar and most of the lower level was right with him chanting “What’s up?”

This was the first of several completely useless matches. Nothing was at stake, and it involved two wrestlers I couldn’t give a rip about. I should have gone to buy another beer.

The fan-chosen stipulation was that this would be a No-Holds Barred match, but it actually was a No-Disqualification match. Either that, or “no holds barred” also means “no stop-signs-used-as-weapons barred”. Anyway, the whole match was telegraphed start to finish. First off, there was no way Rey Mysterio would lose in Phoenix, especially with no belt or angle at stake. That means the 619 had to come at the end, which means that his first two attempts would have to be thwarted (though, I must admit, Kane timed the second “gotcha” pretty well). When Kane threw the steel steps into the ring, my buddy and I both joked, “Don’t do it, Kane, it’ll only be used against you!” Sure enough, a Big Red face full of steel began Mysterio’s momentum shift and before you can say “hurricanrana”, the Phoenix crowd exploded with joy at Rey’s pointless victory.

I’m glad to see the fans get behind Evan Bourne. Even though there’s still nothing to his character, he’s fun in the ring. This wasn’t a terribly memorable match, unfortunately, save for one thing: I got to see Bourne do a Shooting Star Press. Sure, Hardy ducked it, but a damned impressive flying backflip is still a damned impressive flying backflip.

The reaction to this match was understandably middling. There was no build-up of a Hardy-Bourne rivalry, and everybody seemed to know that Hardy had to retain. Besides, it’s near impossible to get a wrestling crowd excited about a face-versus-face match. You could argue that HHH-Jeff Hardy was an exception, but that’d be because both guys have built up a lot of goodwill over the years. Bourne just isn’t there, so the crowd reaction was just polite appreciation of his athleticism.

I think it’s awesome that the fans voted for this match over a title match between Priceless Twink and Jamaican Punk. Maybe this is finally the message that Vince needs to push those four to the background. Cryme Tyme and John Morrison are eloquent, athletic wrestlers who bring way more to the table than any of the four in the proposed title match (DiBiase has potential, but he hasn’t delivered yet).

The best part of the match was the Phoenix crowd’s “Miz can’t wrestle!” chant. It got big enough that Miz reacted to it directly and feigned anger about it. For as annoying and uninteresting as he is, Miz showed some real personality there.

Oh, Morrison got the pinfall on Shad. Yay.

This was probably my favorite part of the night. My only complaint was that I was the only one standing and screaming for Santino. My excitement upon hearing his music was the highest of the night — save when Jericho came out, of course. Since the fans expectedly chose Santino’s challenger to be the Honky Tonk man (and not Piper or Goldust), the match was short. The Honky Tonk Man showed his age but was reasonably amusing in his pre-match dance-off. The match was mercifully short, with Honky Tonk Man maintaining his dignity in a DQ win. Best of all, Santino retained his belt while still looking as ridiculous as possible.

Match over, the other two candidates had to come onstage. If they’re all getting paid, they might as well get some face time. Goldust’s entrance came first. My buddy, who came with a sign reading, “I’m here for …FFFF… Goldust”, went as berzerk as I did upon seeing Santino. To borrow said buddy’s words, Goldust is unlike any other wrestler of his generation in that he embraced androgyny and still stayed around a long time. That’s quite an accomplishment considering the expectations of your average wrestling fan.

The Last Man Standing match won the vote, but I figured they’d vote for an I Quit match. Apparently, so did Vickie, as she initially announced “I Quit match” as the winner and immediately had to do a retake.

The match itself was a lot more interesting than I expected. They convincingly battered each other throughout and I liked the ending. It’s always great when a submission is surprising and exciting, and Undertaker timed his last-second stand well. Kudos to Taker and Show in this meaningless match.

HALLOWEEN COSTUME CONTEST EVEN MORE BORING THAN IT SOUNDS

Maria’s bountiful bosom looked great, and the fans were correct in choosing Mickie, since she was the only one with an actual costume. Okay, Layla’s Leia was pretty good, but nobody’s voting for her. My only question: what the hell did Victoria do to deserve such constant humiliation? She loses a dozen times to Brie freaking Bella and now they dress her up as a banana?

Why, WWE fans, would you vote for Hardy over a triple threat? Kozlov has the potential to be an all-time great fearsome character; I fear that the fans might never see it. At least this way, they can still massage Kozlov’s undefeated streak.

As expected, HHH defeated Hardy in a proficient, but not quite thrilling match. The most interesting part about the match is that the value of Hardy’s finishers is dropping like the value of our dollar. Hardy landed a Twist of Fate, a Swanton, and TWO Whispers in the Wind and still lost. This angle about Hardy always being aaaaalmost champion is starting to get ridiculous. Next match, Hardy will keep Hunter in an ankle lock for five straight minutes, land all three of his finishers five times apiece, and not take a single bump for the whole match. Then Hunter will sidestep one last Twist of Fate, land a single Pedigree, and win.

The crowd for this match was kind of odd. It was pretty docile all night, but what excitement was ther was undecided. Hardy got a big pop for every one of his moves, but his eventual loss got a bigger one.

Now, the biggest disappointment of the night. At Jericho’s entrance, the two of us made sure to scream as loudly as we could, since there were only about a dozen Jericho fans in the whole place. I realize he’s a heel, but I don’t understand the hatred the fans had for Jericho. Fans around me kept yelling at me that “Jericho sucks” and every time we started a Y2J chant, a group of Fulbright scholars responded with “Y-2-gay”. One day, homosexuality will no longer be used as a casual insult. I doubt I’ll live to see that day, but I choose to remain optimistic.

Personal politics aside, I am more surprised at the love people have for Batista. When I yelled, “Batista is boring!”, some woman gave me an earful about how great he was. I explained my position that there’s nothing compelling about his character, but she was undeterred. Hey, I’ll give her that Batista’s a big, strong dude and the Batista Bomb is a powerful, believable finisher. But the man’s mike skills are suspect to say the least, and he has yet to do a single interesting thing with his character. I don’t get the draw at all.

Needless to say, we were disappointed with Vince’s decision to give Batista the belt. I was hoping that Jericho’s surprise steal of the belt would lead to a year-long heel defense. Every babyface in the business would get a shot, but Y2J would squirm out every time. After the year is over, I figured he’d lose to Cena, since he’d be healthy and overdue for a title defense by then.

Oh yeah, and Austin was the special guest referee. I was a little disappointed that Austin was so blatantly on Batista’s side — he had no reason in the plot to take either side, and the great thing about Stone Cold has always been his independence. That said, I liked the turnabouts with HBK and Orton running in. When it became clear that momentum would permanently slide Batista’s way, I held out hope that evil Orton would save the day. Alas, I’m denied the one time I want Orton to do something decent.

All in all, not a bad show. I should have known that they wouldn’t have two straight PPVs where everyone retains his belt, but did it have to be Jericho? At least I can hold out hope that Y2J will leave Monday’s steel cage match with the belt back in his hands. It would be only fitting for my favorite wrestler to win the belt in a steel cage match. Since it’d be too perfect, I predict a five-month Batista title defense, during which he’ll gain Brie Bella as a valet. That would be the WWE that I know.