By Darrell Johnson on August 25, 2008 in Commentary

Darrell here again, writing his first post since the great Summerslam update of ’08. Vince always gives us a lot of wrestling every week, so I’ll just comment on the broadstrokes. I’m also writing under the assumption that you’ve seen the broadcast already. If you want Soap Opera Digest, go to any other site that gives you every hold in torturous detail. If you’d like to discuss any match or angle I don’t cover here, it’s all good; we can do it in the comments. 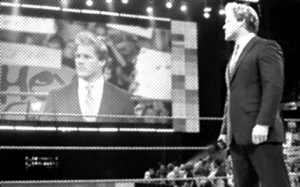 The Jericho angle keeps on rolling, doesn’t it? Post-Summerslam, I was kind of afraid that he’d go one of the two well-worn paths of any wife-abuse angle: either he’d be horrified at what he’d done and attempt to apologize, or he’d ramp up the chauvinism and say she had it coming. Instead, he stuck with the HBK-as-reckless-egotist approach and pulled it off nicely. This really is outstanding heel work — he’s the villain whose motives you abhor, but still sympathize with.

Perhaps the best part of Jericho’s speech, though, is that I get to start what I hope will become a regular feature at TheSteelCage. It’s time for Canadian Pronunciation Alert: “…and even though you brazenly bragged aboht your accomplishments and your accolades…” Ah, good stuff, Jericho. You and Edge should be giving me weekly additions to that list.

By the way, HBK’s follow-up interview was appropriately passive. I want to see Michaels seethe for at least a month before this feud finally explodes. This is a dish that should be slow-cooked.

The PPV Adamle special is a Championship Scramble. It sounds like something he ordered at Denny’s. Five guys pinning each other like crazy for twenty minutes. Whoever gets the last pinfall or submission when twenty minutes expires becomes the new Heavyweight Champion. As dumb as this idea might be, I like that they’re trying new things. What I don’t like is that they picked Raw’s five most boring wrestlers to share a ring. JBL, Cena, Batista, Kane, and Punk: it’s four brawling lummoxes and a doucheturd — what’s interesting about that?

Now, let’s compare that with the Championship Scramble that Smackdown is offering: HHH defending against The Brian Kendrick, MVP, Shelton Benjamin, and Jeff Hardy. Now those are the kinds of wrestlers you put into a clusterfuck! Quick, athletic dudes with a really big guy thrown in. I have a feeling that Vince is experimenting with this new idea by having two diametrical approaches at once: the big, slow brawler kind that Vince seems to love too much, and the quick, athletic kind that I prefer. I’m guessing that the latter will make the Championship Scramble a success (or at least more entertaining than most of us would fear).

Ten men, over-the-top, classic battle royal. It started the previous segment with Big Show excited to join the Battle Royal, only to be told by Vickie Guerrero that he wasn’t booked for the match due to an oversight. Show’s reaction was perfectly crestfallen. He really is the only guy who can pull off the lovable, sensitive giant when he needs to.

Anyway, crestfallen Big Show sat in on the Battle Royal for a few minutes, only to interfere by tossing everyone out. It was a nice touch to have Kendrick win by falling into Zeke’s big, protective arms. They’re really nursing the Kendrick/Ezekiel relationship here, and I’m loving it.

I’m surprised at how quickly Brian Kendrick has managed to impress me. His moves are clean, his mic spots are funny, he’s believable against his competition, and he has a great silent manager. They should keep it up.

KANE SPEAKS VAGUELY AND CONFUSES ME

Kane, I have some things to ask you. Why do you care about Rey Mysterio so much all of a sudden? Where the hell has Mysterio been all this time anyway? Why should we care about your maniacal hatred? Why should a seven-foot-tall beast give two shits about a five-foot-six pixie?

So the WWE has guys named Bam Neely and Kenny Dykstra. Should we expect Stan Marino and Don Stockton in the coming years?

Who is The Shockmaster?
Federation Update (9.1.08)