By Darrell Johnson on August 17, 2008 in Commentary 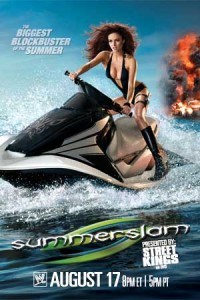 Hello, dear readers; welcome to The Steel Cage, the web’s newest and most exciting wrestling blog. I could go on about the site’s purpose, our vision, and how we will one day put every other wrestling-related website to shame, but there is important business to attend to: Summerslam. So without further ado, let us begin The Steel Cage’s inaugural PPV update.

Ah, Summerslam — the PGA of wrestling’s Big Four. It tends to be the biggest wildcard of the major pay-per-views, but thankfully, it did not disappoint this year. Let’s take this update in a loose, running-diary format.

The broadcast began at 4:30 Arizona time with its standard half-hour hype-up. Boy correspondent Jack Korpela, wearing a suit he borrowed from his dad, introduced the montages lovingly over-produced by the WWE A/V club. I always regret watching the hype-up, since every video feature is replayed right before every match, so I get far too many reminders of what happened in the last few weeks. Also, viewers got treated to what seemed like fifty consecutive plays of the Official Song of Summerslam, “Ready to Roll” by Jet Black Stare. First off, Jet Black Stare is a terrible band name. Second, why does the WWE bother choosing a different song for every PPV? Besides the Chili Peppers song from Wrestlemania, every song they choose is the same generic butt-rock with overblown power chords. I strongly suspect that they’re actually using the same song every time, but changing its title and making up a different band name.

One more thing about the way Summerslam is marketed: its sponsor is the DVD release of Street Kings, a largely forgotten movie from a few months ago. The funny part about this is that JR introduced Summerslam by saying, “Street Kings presents the biggest blockbuster of the summer!” Yep — a movie is presenting a blockbuster. All right.

Anyway, after the hype-up, JR welcomed us to Conseco Fieldhouse in Indianapolis. Well, he actually welcomed us to “Can-say-co” Fieldhouse, which makes me wonder if this is where Mark McGwire gets his HGH.

We opened with a match between MVP and Jeff Hardy, whom JR called the Unique Enigma for some reason. As I expected, Hardy and MVP gave us a match akin to their personas: entertaining, but inconsequential. The kick from MVP to Hardy while MVP lay in the corner was well played. My only actual complaint is that during attempted submissions, Hardy oversold his pain, but that’s hardly news. MVP eventually won it with a kick to the head, thus completing Jeff Hardy’s required in-ring humiliation as part of the WWE Wellness Policy. (The policy states, “A second violation results in a 60-day suspension and a post-suspension humiliation of the writers’ choosing.” Considering William Regal’s pointless post-suspension feud with Jamie Noble, I think Hardy got off easy.)

Hey look, it’s three of my favorite things: Santino’s comic brilliance and Maria’s magnificent breasts. I’ve loved Santino ever since he turned heel/buffoon. The decision to pair him with Beth Phoenix is turning out to be a stroke of genius, because she plays off him very well. A funny segment overall, if only for Santino’s use of the term “manscaping” to refer to his unibrow.

JR and Tazz implored us to text yes or no to the question, “Will Vickie and Edge get a divorce?” I wish I had the option to say, “It’s none of my business,” because really, it’s strictly a domestic matter. Those kids are having trouble, and the last thing they need is for mouth-breathing wrestling fans to pile on.

I kind of liked the gimmick for this match. Both the Women’s Championship and the Intercontinental Championship were on the line, making it a de facto intergender tag-team title match. That’s a belt I hope is never created, but seeing it once in a lifetime is cool, especially when the winners are so damned entertaining.

Best part of the match: as Santino and the Glamazon conferred outside the ring, Kingston ran at them to kick them through the ropes. Kingston held up, but that didn’t stop Santino from jumping into Beth Phoenix’s arms in fear. Well played all around. At this rate, Santino might become our generation’s Charlie Chaplin.

The match ended with the Glamazon face-busting Mickie, followed by Santino’s always amusing over-celebration. Having him leave on Beth Phoenix’s shoulders was high-larious — and impressive, since Santino’s a pretty big dude.

Another excellent segment. Wife by his side, Shawn Michaels announced that he would retire. (Which reminds me, this segment brought us our Surprisingly Clever Fan Sign of the Day: “HB401K”.) Of course, fresh heel Chris Jericho confronted him, insisting that HBK admit that Jericho was the true reason that Michaels is walking away. Their conversation and staredown are why I’ve been so impressed by Jericho of late. In the course of just over a month, he believably shifted from lovable clown to egotistical uber-heel and managed to have the entire crowd go against him. Sure, it helped that the ever-popular Showstopper was on the other side, but let me ask you this: if the roles were reversed, do you think the conflict would have been as convincing? Even within the plot, Jericho made a great point: no matter what HBK does, most of the crowd will always be on his side. Maybe that just means that Michaels has built up too much goodwill for a heel-turn to stick. But I think it also means that Jericho is simply a more versatile performer.

Once the staredown ended, Jericho reared back to level Michaels, but caught Mrs. Michaels instead. I can’t be sure, but it looked like Jericho actually connected, judging by the swollen lip. If that’s the case, I guess I have to be impressed with Rebecca Michaels. To quote my buddy Adam, “That’s a lot of dedication to a segment!”

This was a mercifully short match. The writers knew it would be the least interesting both dramatically and athletically, so they had Tony Atlas interfere almost immediately, which allowed Hardy to win, but Henry to retain the ECW Championship. Hooray, I guess.

You know what? I’m not even calling this a match. The real third match happened next.

I am completely sick of both of these wrestlers. Punk I never liked, as he just adds moral superiority to a generic, douchey persona. Plus, he’s apparently a corporate whore — who tattoos a fucking Pepsi logo on himself? Ugh. And JBL is just old and uninteresting to me. He was great as a color announcer, but I can’t get behind anything he does as a wrestler anymore.

Surprisingly enough, the match had a memorable moment, though not intentionally so. Punk and JBL accidentally cracked skulls halfway through, opening a large gash on the back of Punk’s head. It was pretty bad: he left huge red stains every time he hit the mat. This explains the relatively sudden ending with Punk giving JBL a Go To Sleep. Just before then, our feed cut out for a second, causing us to wonder whether JBL was a little too obvious in signaling CM Punk to end the match. Did anyone else have that blip?

Regardless, it was the predicted and predictable ending, as the days of JBL as a believable title contender have passed. As dumb as it is to have CM Punk as Heavyweight Champion, it would have been even dumber to have him lose to Bradshaw.

The biggest belt, the worst booking. Why have Khali as #1 Contender? The Indianapolis fans had it right when they chanted “you can’t wrestle” at Khali. I get it, Vince — he’s big, he looks scary, and the WWE needs some more footage that they can re-edit and send to Mumbai. But at Summerslam?

The match itself was pretty lousy. Khali dominated the whole time with his silly vise-grip. At the point when HHH pulled apart Khali’s hands, only to have them squeeze back onto his skull, every person in my house cringed audibly.

Triple H won when he finally landed a Pedigree. That’s all it took. No big comeback, no spinebuster (which, in retrospect, probably would have destroyed HHH’s quads), no hard-fought effort to fell the great redwood… just a single Pedigree and one-two-three. I take this as absolute proof that Khali is incapable of taking a bump, and thus shouldn’t be anywhere near a championship match.

It’s the first time these two ever had a match against each other! Why so long? I think it’s because the WWE feared that if they put both generically honorable, yet meatheaded characters in the same ring, the universe would implode. That said, the two veterans gave us a good match. Batista’s mid-air power bomb was damn impressive, as was Cena’s reversal into an F-U.

My only complaint is that I wish there were a better reason in the plot for these two to have fought. Beyond Cena’s “competitive scowl”, the writers gave us nothing. I’m guessing that they didn’t want a trumped-up feud to interfere with the mixed reactions that they elicit. Even though I didn’t care who won, I did like that the crowd was split pretty evenly between Batista and Cena supporters. But still, shouldn’t wrestlers have more of a reason to have a pay-per-view rivalry than “just because”?

I have one word for this Hell in a Cell match: brutal. Edge and Undertaker were hitting each other hard. Every blow, be it by chair, camera, or table, seemed pretty on-the-money. Consistently throughout the match, folks at my house exclaimed, “Jesus!” and “whoa!”

I liked the twist of the breakaway panel that let them out of the Cell. Edge’s spear that broke the panel was convincing and entertaining, though for a second I did worry that JR might get crushed. The subsequent spear that busted the ECW announcers’ table was outstanding.

The course of the match was best described by my buddy Bryan: he compared it to a game of Mouse Trap where you spend the whole game setting up the pieces, only to have your opponent win the game. Edge spent the first part of the match setting up tables and ladders, only to have Undertaker take advantage. Edge was choke-slammed through his own two-table contraption, then after the match was over, was tossed off the ladder he erected himself. His falling through the ring into Pyrotechnic Hell was a bit much for me, but it did make for a flashy ending.

I was happy with this PPV. The HHH-Khali match was about as bad as I thought it would be, but a funny Santino appearance, a quality Cena-Batista matchup, and an outstanding Edge-Undertaker Hell in a Cell made for an entertaining evening. Good show, Vince.

Who is The Shockmaster?