Season 2 of The Boys has hit and no matter what your take was, it certainly wasn’t predictable. Fresca?

Join us as we return to The Seven, Vought International and The Church of the Collective to discuss all the head-popping hilarity and whale-deep gore of the latest season.

GoPro blackmail, the ultimate Übermensch, Almond Joys and most of all…  all the C-Bombs you can shake a love sausage at, this season had it all.

And next year we get Jensen Ackles.

So don’t be a toxic personality, pass the Fresca (now exploding baby free) and enjoy episode 106 of Unfunny Nerd Tangent: The Boys, Season 2.

Put down the Fresca and grab an Unfunny Nerd Tangent shirt. Queen Maeve, Storm Front, Starlight, Kimiko, none of them hold a candle to our very own Mon Milfma! By Greig Tansley on September 20, 2020 in Podcast, Unfunny Nerd Tangent You asked for it, so here it is! It took a while, but FINALLY, Unfunny Nerd Tangent rates and reviews the nostalgic show that’s brought sentimental memories flooding back to even the most cynical karate-dojo masters – Seasons 1 & 2 of Cobra Kai.

Retro-sequels and long-time-reunions are tough to get right, especially in this day and age of the complete reboot (and rip-off). But as we all know, the original is usually the best, so when we sat down to discuss why Cobra Kai has taken the world by storm (for young and old), we were swamped with potential tangents to delve into.

What have Johnny and Daniel been up to these past 35 years? Does a new generation of ‘karate kids’ live up to the mantle of their forbearers?  And what happened to Mr. Miyagi?

Well, we flipped the script, dove into the back of the cement truck and cranked up the glam metal for this one to prove one way or another whether ‘Mercy is for the Weak’ or not.

If you’re going to compete, you need the right attire. So get yourself an Unfunny Nerd Tangent shirt! Because as we all know… Mon Milfma is ‘the best around’!

By Greig Tansley on September 8, 2020 in Podcast, Unfunny Nerd Tangent

We were supposed to unite the world in nerddom. According to George Carlin, a podcast created by Tansley and Agne will save reality as we know it, uniting humanity across all time. If only we could get it done in 90 minutes.

Good thing we have a time machine, because we’re going all the way back to 1989 in San Dimas, California (which looks conspicuously like the suburbs of Phoenix) to celebrate Bill & Ted’s Excellent Adventure. Then we’re cheating death, giving melvins to evil robot us-es and definitely not covering KISS as we dial up Bill & Ted’s Bogus Journey from 1991.

And finally, we drop the old phone booth in the nightmarish hellscape of 2020. After a most unprecedented 29-year hiatus, Bill S. Preston, Esq., and “Ted” Theodore Logan are wild dads ready to unite the world against a most heinous dearth of new movie releases.

Reuniting an almost-too-Bill Alex Winter and a maybe-not-Ted-enough Keanu Reeves, Bill & Ted Face the Music shows us the inseparable slacker icons still struggling to fulfill their musical destiny (in maybe a little bit of a Bogus Journey retcon). And as their fairytale marriages near a breaking point, the future calls with a hard deadline.

So lick the Cheetos dust off your fingers and hop into your time machine — whether it looks like a vintage phone booth or a sleek adult massager — because we’ve got a band to assemble and a song to not technically steal.

Music by: Big Pig and KISS.

Ted, what are you doing with that Unfunny Nerd Tangent shirt? This is a history report, not a babe report. But Bill, Mon Milfma is a historical babe!

By Greig Tansley on August 9, 2020 in Podcast, Unfunny Nerd Tangent 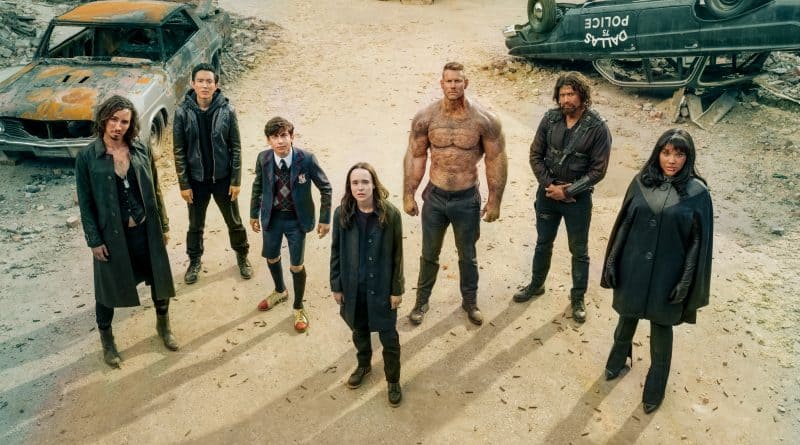 Oh my God, we’re back again… After crowning the first ever UNT champion in Episode 100, we return to ‘normal’ to avoid yet another Apocalypse with Season 2 of The Umbrella Academy.

This season brought a lot to the table, diving into some unexpected themes like mental health, LGBT issues, the JFK Assassination and of course, the Civil Rights Movement.

But was it also filled with superpowers stuff and time-travel nonsense? And did we go off on some weird tangents while discussing it? You bet your talking goldfish it/we did.

So, before you come down with a case of paradox psychosis, jump back into the UNT timeline with us as we review The Umbrella Academy: Season 2.

PS: We heard a rumor you rated us 5 stars. No? All right then, just listen anyway…

I heard a rumor you bought an Unfunny Nerd Tangent shirt. Don’t try to resist Mon Milfma! She’s the ultimate ‘Handler’! Get one today and avoid the Apocalypse!